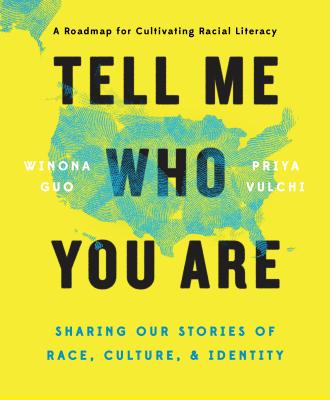 Tell Me Who You Are

An eye-opening exploration of race in America

In this deeply inspiring book, Winona Guo and Priya Vulchi recount their experiences talking to people from all walks of life about race and identity on a cross-country tour of America. Spurred by the realization that they had nearly completed high school without hearing any substantive discussion about racism in school, the two young women deferred college admission for a year to collect first-person accounts of how racism plays out in this country every day--and often in unexpected ways.

In Tell Me Who You Are, Guo and Vulchi reveal the lines that separate us based on race or other perceived differences and how telling our stories--and listening deeply to the stories of others--are the first and most crucial steps we can take towards negating racial inequity in our culture. Featuring interviews with over 150 Americans accompanied by their photographs, this intimate toolkit also offers a deep examination of the seeds of racism and strategies for effecting change.

This groundbreaking book will inspire readers to join Guo and Vulchi in imagining an America in which we can fully understand and appreciate who we are.

Praise For Tell Me Who You Are: Sharing Our Stories of Race, Culture, & Identity…

“In Tell Me Who You Are, Priya Vulchi and Winona Guo do exactly that--tell us who they are, how they have come to thinking so carefully, so deeply about race, and how they want to create change. From Alaska to Florida they visit all fifty of these United States to talk to people about their experiences of race and the intersections of identity in America. This book is at once hopeful, raw, and brimming with curiosity, engagement and youthful energy. Through the conversations these women have with people from all walks of life, we see that the key to any kind of progress begins with letting people tell us who they are. If you want to have richer, more fruitful discussions about race, gender, all the things that comprise our identities, this book will give you a necessary vocabulary. All you have to do is turn the page.”

“This is an exploration of race in America by two young women who are earnestly challenging their own assumptions, and encouraging the rest of us to do the same.  If you’re a young person who wants to be part of our national conversation on race but doesn’t know where to start, this book is an engaging launching point.”

“This is a critical book for current times where we are seeing a resurgence of nationalism, racism, sexism and authoritarianism globally. Better communication and understanding, particularly among the next generation, is the key to humanizing the unfamiliar and countering identity politics. Kudos Priya and Winona for your vision, your journey and the honesty and respect with which you tackle diverse stories from across the country."

"From the moment these two remarkable young women took the TEDWomen stage as high school seniors to talk about their commitment to have a real conversation about race, I knew their work would be a game changer in the conversation about race in this country…and Tell Me Who You Are is just that—the outcome of an extraordinary journey from the wealthiest neighborhoods to the poorest reservations and communities to find out more about who we all are."

--Pat Mitchell, former President of CNN Productions and the first woman President and CEO of PBS


“I’m truly astonished by the vision, audacity, and leadership of Winona Guo + Priya Vulchi to compile these amazing stories from over 150 Americans. These girls are the antidote to the notion that this generation is apathetic. In fact, they are our thought leaders and have proven to be dynamic change-makers! It takes enormous courage to confront the cracks in our humanity and hold space for such diverse stories.

Tell Me Who You Are is exactly what our country needs right now. In these divisive times, two young women have managed to create a tangible catalyst for compelling and necessary conversation, by doing something truly radical: Listening. Deeply.

“While we know a lot about racial literacy, the work that Winona Guo and Priya Vulchi have accomplished in Tell Me Who You Are brings life to this concept. They are magical in weaving in the stories of everyday folks’ racial traumas and triumphs and force us to question the way we see the world. They encourage us to stop assuming we understand racial, gender, sexual, age and ability biases and open our eyes. They implore us to be more than spectators or witnesses, ignorant of the broken racial promises right in front of us and speak to that loss. This work is a call for not just talking about social justice but doing random acts of justice everyday. Be careful. If you want your racial justice neatly packaged into the “saying the right thing” or “avoiding the wrong thing to say,” go elsewhere. But if you want to become fluid in how to keep the racial justice promises we make to people who are different in this society, read on.”


“Brave. Bold. Insightful. This book not only offers insight into how we think and do race, it is a testament to what this generation can do to fundamentally transform our world. The reader can’t help but feel the energy, passion and commitment of these two brilliant young women.”

Winona Guo and Priya Vulchi co-founded the organization CHOOSE in 10th grade to provide the tools we lack to talk about race and identity in America. They published a racial literacy textbook for educators called "The Classroom Index," which has been recognized and funded by Princeton University and is currently being used by educators in more than 30 states. Before attending Harvard and Princeton University (respectively), Winona and Priya traveled to all 50 states, collecting hundreds of powerful stories about race, culture, and intersectionality. They are the youngest residents in the TED Residency Program and spent their summer further analyzing their research before heading to college.
Loading...
or
Not Currently Available for Direct Purchase