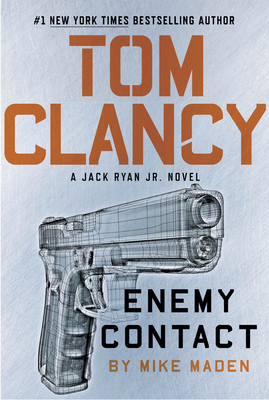 Jack Ryan, Jr.’s race to stop an international criminal conspiracy is intertwined with the fate of an old friend in this blistering entry in the #1 New York Times bestselling series.

The CIA's deepest secrets are being given away for a larger agenda that will undermine the entire Western intelligence community. Director of National Intelligence Mary Pat Foley wants it stopped but doesn't know who, how or why.

Jack Ryan, Jr., is dispatched to Poland on a different mission. The clues are thin, and the sketchy trail dead ends in a harrowing fight from which he barely escapes with his life.

If that's not bad enough, Jack gets more tragic news. An old friend, who's dying from cancer, has one final request for Jack. It seems simple enough, but before it's done, Jack will find himself alone, his life hanging by a thread. If he survives, he'll be one step closer to finding the shadowy figure behind the CIA leak and its true purpose, but in the process, he'll challenge the world's most dangerous criminal syndicate with devastating consequences.

“Maden’s style meshes perfectly with the classic Clancy yarns, with global action, struggle, suffering, and formidable foes who get what they deserve. Another well-crafted and enjoyable escape from reality. The Ryans just keep on saving the world.”—Kirkus Reviews

“Phenomenal...[Maden’s] work in Clancy’s Ryanverse has been nothing short of brilliant since taking over.”—The Real Book Spy

“Drawing effectively on characters and story lines from the Clancy oeuvre, Maden adds top-notch action and excellent pacing to the mix. Fans of black-ops thrillers who may question the idea of continuing a deceased author’s stories should make an exception for Maden.”—Booklist

“Maden capably incorporates real-world issues into a compelling narrative of espionage, cyber attacks, and political maneuverings. As he ratchets up the suspense with each subsequent page, he imbues this entry in the series with meaningful questions of self-reflection and identity.”—Chapter16.org

“How much intrigue and mystery can be packed in one novel? Mike Maden really tests the limits in the new Jack Ryan Jr. novel. Enemy Contact takes off like a Navy fighter shot off a catapult...An excellent summer beach read with all the plot twists, spy craft, and technology ripped from the headlines...Maden has definitely made this character and his supporting cast his own in this excellent third trip through the Tom Clancy universe.”—New York Journal of Books