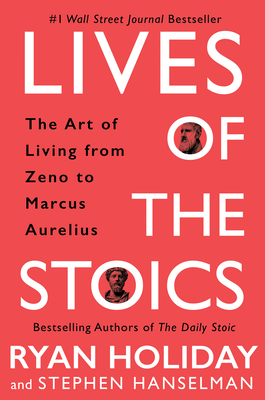 Lives of the Stoics

The Art of Living from Zeno to Marcus Aurelius

From the bestselling authors of The Daily Stoic comes an inspiring guide to the lives of the Stoics, and what the ancients can teach us about happiness, success, resilience and virtue.

Nearly 2,300 years after a ruined merchant named Zeno first established a school on the Stoa Poikile of Athens, Stoicism has found a new audience among those who seek greatness, from athletes to politicians and everyone in between. It's no wonder; the philosophy and its embrace of self-mastery, virtue, and indifference to that which we cannot control is as urgent today as it was in the chaos of the Roman Empire.

In Lives of the Stoics, Holiday and Hanselman present the fascinating lives of the men and women who strove to live by the timeless Stoic virtues of Courage. Justice. Temperance. Wisdom. Organized in digestible, mini-biographies of all the well-known--and not so well-known--Stoics, this book vividly brings home what Stoicism was like for the people who loved it and lived it, dusting off powerful lessons to be learned from their struggles and successes.

More than a mere history book, every example in these pages, from Epictetus to Marcus Aurelius--slaves to emperors--is designed to help the reader apply philosophy in their own lives. Holiday and Hanselman unveil the core values and ideas that unite figures from Seneca to Cato to Cicero across the centuries. Among them are the idea that self-rule is the greatest empire, that character is fate; how Stoics benefit from preparing not only for success, but failure; and learn to love, not merely accept, the hand they are dealt in life. A treasure of valuable insights and stories, this book can be visited again and again by any reader in search of inspiration from the past.

Praise For Lives of the Stoics: The Art of Living from Zeno to Marcus Aurelius…

"Whether you're a general or a gardener, a stockbroker or a senator, there is much to learn from Ryan Holiday’s excellent Lives of the Stoics."
--Senator Ben Sasse

"There is philosophy for school and philosophy for life. This book is about the lives of men and women who lived their words and shows you how to do the same."
--Thomas Tull, founder of Legendary Entertainment

"The Stoics were more than just thinkers. They were athletes and generals and emperors and husbands and daughters and parents. This is a wonderful book that shows you the lives behind the philosophers whose words have shaped the world."
--Chris Bosh, 2x NBA Champion

“In story after page-turning story, Lives of the Stoics brings ancient philosophers to life. And that is exactly what they would have wanted, because Stoicism is not a thought experiment but rather a guide for living. Ryan Holiday and Stephen Hanselman show us how the masters succeeded — and sometimes failed — at turning theory into practice."
--David Epstein, New York Times bestselling author of Range

“In a time of pandemic and economic turmoil, we are all asked to be stoic. Lives of the Stoics is a great place to begin. It entertainingly, and yet thoughtfully, introduces us to the philosophers – and mere human beings – who shaped ideas that guide us over 2,000 years later. A great read, particularly for a tough time.”
--Gen. Stanley McChrystal, author of Team of Teams

“Ryan Holiday and Stephen Hanselman have achieved something remarkable with Lives of the Stoics. It's a gift to the many of us today who are searching for inspiration and sense a deep connection with the thought of Zeno, Cato, Seneca, Epictetus, and Marcus Aurelius. At last the story we needed has been told! Indispensable to anyone who genuinely wants to learn about Stoic philosophy."
--Donald Robertson, author of How to Think Like a Roman Emperor

“Holiday and Hanselman (coauthors of The Daily Stoic) explain in this stellar work the implications of Stoic dedications to truth, wisdom, resilience, and character...This illuminating collection of biographies makes great use of Stoic wisdom to demonstrate the tradition’s values for any reader interested in ancient philosophy.”
--Publishers Weekly (starred review)

“An introductory guide to the luminaries of Greco-Roman ethical philosophy….Thoughtfully complicates Stoicism. Rather than emphasizing Spock-like, unemotional rigor (as pop culture often does), the authors reveal how the philosophy often debated its identity.…At a time when public nobility is hard to come by, this is a good reminder of the power of ethical leadership.”
--Kirkus Reviews

Ryan Holiday is one of the world's foremost thinkers and writers on ancient philosophy and its place in everyday life. He is a sought-after speaker, strategist, and the author of many bestselling books including The Obstacle Is the Way; Ego Is the Enemy; The Daily Stoic; and the #1 New York Times bestseller Stillness Is the Key. His books have been translated into over 30 languages and read by over two million people worldwide. He lives outside Austin, Texas, with his family.

Stephen Hanselman has worked for more than three decades in publishing as a bookseller, publisher and literary agent. He is a graduate of Harvard Divinity School, where he received a master's degree while also studying extensively in Harvard's philosophy department. He lives with his family in South Orange, New Jersey.