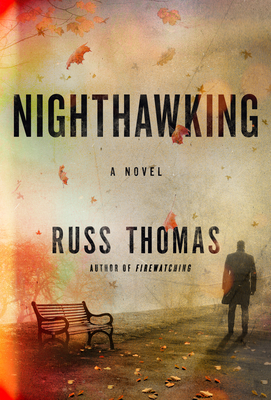 "Firewatching and Nighthawking are comparable with the best of Michael Connelly’s Bosch books and James Lee Burke’s Robicheaux novels, and – naturally – Ian Rankin; but there’s an elegiac quality here that reminds me of Kate Atkinson’s Jackson Brodie titles and the Dublin Murder Squad series by Tana French.”--AJ Finn, author of The Woman in the Window

When a nighthawker on the hunt for antiquities instead uncovers the body of a foreign student, Detective Adam Tyler is pulled into a serpentine mystery of dangerous secrets, precious finds, and illegal dealings.

Under the dark cover of night, a figure climbs over the wall of the Botanical Garden with a bag and a metal detector. It's a dicey location in the populous city center, but they're on the hunt--and while most of what they find will be worthless, it takes only one big reward to justify the risk. Only this time, the nighthawker unearths a body. . . .

Detective Sergeant Adam Tyler and his newly promoted protégé, Detective Constable Amina Rabbani, are officially in charge of Cold Case Reviews. But with shrinking budgets and manpower in the department, both are shunted onto the murder investigation--and when the victim is identified as a Chinese national from a wealthy family, in the UK on a student visa, the case takes on new urgency to prevent an international incident.

As Tyler and Rabbani dig further into the victim's life, it's becomes clear there's more to her studies and relationships than meets the eye, and that the original investigation into her disappearance was shoddy at best. Meanwhile, someone else is watching these events . . . someone who knew the victim, and might hold the key to what happened the night she vanished.

“I’ve got a new man in my life. His name is Adam Tyler. Yorkshireman. Enjoys cold drinks and colder cases. Hangs out in exceptional debut novels and exceptionaller sequels. Firewatching and Nighthawking are comparable with the best of Michael Connelly’s Bosch books and James Lee Burke’s Robicheaux novels, and – naturally – Ian Rankin; but there’s an elegiac quality here that reminds me of Kate Atkinson’s Jackson Brodie titles and the Dublin Murder Squad series by Tana French.”—AJ Finn, author of The Woman in the Window

"Outstanding. . . Thomas adeptly develops his diverse cast, but the novel’s real power lies in its intricate structure—the mystery surrounding the body is impressively deep, the various levels of tension are relentless, and every chapter ends with a narrative punch to the face. This police procedural is virtually unputdownable."—Publishers Weekly (starred review)

Russ Thomas grew up in the 80s reading anything he could get his hands on, writing stories, watching television, and playing videogames: in short, anything that avoided the Great Outdoors. After a few 'proper' jobs, he discovered the joys of bookselling, where he could talk to people about books all day. Now a full-time writer, he also teaches creative writing classes and mentors new authors.
Loading...
or
Not Currently Available for Direct Purchase