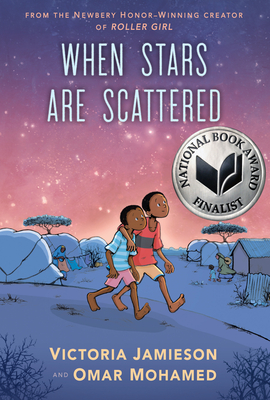 When Stars Are Scattered

A National Book Award Finalist, this remarkable graphic novel is about growing up in a refugee camp, as told by a former Somali refugee to the Newbery Honor-winning creator of Roller Girl.

Heartbreak, hope, and gentle humor exist together in this graphic novel about a childhood spent waiting, and a young man who is able to create a sense of family and home in the most difficult of settings. It's an intimate, important, unforgettable look at the day-to-day life of a refugee, as told to New York Times Bestselling author/artist Victoria Jamieson by Omar Mohamed, the Somali man who lived the story.

Praise For When Stars Are Scattered…

★ "Jamieson's characteristically endearing art, warmly colored by Geddy, perfectly complements Omar's story, conjuring memorable and sympathetic characters who will stay with readers long after they close the book . . . This engaging, heartwarming story does everything one can ask of a book, and then some.” —Kirkus, starred review

★ "With this sensitive and poignant tale, Jamieson and Mohamed express the power of the human spirit to persevere." —School Library Journal, starred review

★ "Tragedy is certainly present throughout the story, yet Mohamed and Jamieson’s focus on deep familial love and education works to subvert many refugee stereotypes." —Horn Book, starred review

★ "Mohamed's experience is unfortunately not unique, but it is told with grace, humility, and forgiveness. This beautiful memoir is not to be missed." —Booklist, starred review

★ "Jamieson and Mohamed together craft a cohesive, winding story that balances daily life and boredom, past traumas, and unforeseen outcomes alongside camp denizens’ ingenuity and community . . . colorist Iman Geddy’s deep purple skies drive home the title. The result of this team effort is a personal and poignant entry point for young readers trying to understand an unfair world." —Publishers Weekly, starred review

★ "The graphic novel presentation and first person narration from the young narrator creates an immediacy and connection with the events of the story. Readers are quickly drawn into Omar’s world and worry for him and his friends." —School Library Connection

"Over the next fifteen years chronicled in this moving, slightly fictionalized graphic novel, the boys grow to manhood in an overcrowded tent city . . . Jamieson’s artwork, affectionately depicting resilient kids who manage to carve out lives in a community with few solid prospects, reprises the inviting ebullience readers will recognize from Roller Girl and All’s Faire."  —BCCB

Victoria Jamieson is the co-creator of the National Book Award finalist When Stars Are Scattered and the creator of the graphic novels All's Faire in Middle School and Newbery Honor winner Roller Girl. She received her BFA in illustration from the Rhode Island School of Design and worked as a children's book designer before becoming a freelance illustrator. She has also worked as a portrait artist aboard a cruise ship, and has lived in Australia, Italy, and Canada. Now she lives in Pennsylvania with her husband and son.

Omar Mohamed is co-creator of the National Book Award finalist When Stars Are Scattered, based on his childhood growing up in the Dadaab refugee camp, after his father was killed and he was separated from his mother in Somalia. He devoted everything to taking care of his younger brother, Hassan, and to pursuing his education. He now lives in Lancaster, Pennsylvania, with his wife and five children, and is the founder of Refugee Strong, a non-profit organization that empowers students living in refugee camps.

Iman Geddy, the colorist for this book, is an Atlanta-based designer and illustrator who is passionate about using the graphic arts for social good. Inspired by the geometric harmony of Islamic architecture as well as the colorful equatorial landscapes of eastern Africa, she creates striking art that highlights the beauty of the world around us.
Loading...
or support indie stores by buying on