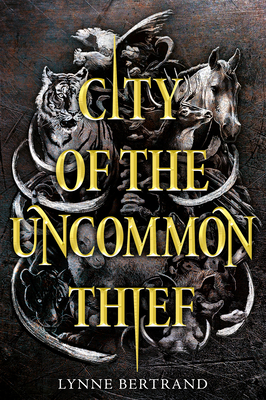 City of the Uncommon Thief

A dark and intricate fantasy, City of the Uncommon Thief is the story of a quarantined city gripped by fear and of the war that can free it.

"Guilders work. Foundlings scrub the bogs. Needles bind. Swords tear. And men leave. There is nothing uncommon in this city. I hope Errol Thebes is dead. We both know he is safer that way."

In a walled city of a mile-high iron guild towers, many things are common knowledge: No book in any of the city's libraries reveals its place on a calendar or a map. No living beasts can be found within the city's walls. And no good comes to the guilder or foundling who trespasses too far from their labors. Even on the tower rooftops, where Errol Thebes and the rest of the city's teenagers pass a few short years under an open sky, no one truly believes anything uncommon is possible within the city walls. But one guildmaster has broken tradition to protect her child, and now the whole city faces an uncommon threat: a pair of black iron spikes that has the power of both sword and needle on the rib cages of men has gone missing, but the mayhem they cause rises everywhere. If the spikes are not found, no wall will be high enough to protect the city—or the world beyond it.
And Errol Thebes? He's not dead and he's certainly not safe.

Praise For City of the Uncommon Thief…

"City of the Uncommon Thief is dizzying and bright, a masterful novel that sits somewhere in the space between Frances Hardinge and Philip Pullman."—Tor.com

★ "A macabre marvel of a tale."—Kirkus Reviews, starred review

★ "Bertrand is wildly ambitious, and she’s masterful in her success, trusting readers to be patient and thoughtful enough to tackle shifting locations, characters, perspectives, and plots. It all comes together into a conclusion that drags wildly disparate parts together, howling for their independence but finally yielding to become part of a (begrudgingly) tamed and comprehensive whole that is worth every word."—BCCB, starred review

★ "Not only a sprawling work of precise storytelling, but also a literary Rubik’s cube […] City of the Uncommon Thief is genre-defying fiction at its finest, and Bertrand sticks the landing on a book that knows no fear."—Book Page, starred review

"Epic...Recommended for fans of Sabaa Tahir’s An Ember in the Ashes and Leigh Bardugo’s Six of Crows."—SLJ

"A strange, fascinating adventure in a singular world."—Publishers Weekly

Lynne Bertrand is the author of two books for very young readers. This is her first book for young adult readers. She works in A&R for a music label and lives with her family in Northampton, MA.
Loading...
or support indie stores by buying on