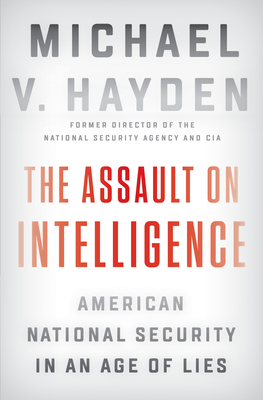 The Assault on Intelligence

Praise For The Assault on Intelligence: American National Security in an Age of Lies…

“For a longtime spook, Hayden is a breezy and direct writer. He reduces complex issues of cyber and information warfare to essentials, and his polemic is leavened with humor and sympathy. He is at his best, though, when he shifts to a purely analytical tone. He coolly forecasts the direction of America under Trump, explains the intelligence that foreign governments are likely to collect from the president’s Twitter feed and describes the benefits Russia drew from the June 2016 Trump Tower meeting between Kremlin-connected Russian attorneys and senior Trump campaign officials.” — The New York Times

“The more important, absorbing and disturbing aspect of Hayden’s book is the analysis from his professional perspective of what Trump and Trumpism mean for the intelligence community. It is sober, nuanced and, quite frankly, scary as hell.” - Mark Galeotti, Washington Post

Michael Hayden is a retired United States Air Force four-star general and former Director of the National Security Agency, Principal Deputy Director of National Intelligence, and Director of the Central Intelligence Agency. He is currently a principal at the Chertoff Group, a security consultancy founded by former Homeland Security Secretary Michael Chertoff. Hayden also serves as a Distinguished Visiting Professor at George Mason University's Schar School of Policy and Government and is the founder of the Hayden Center for Intelligence, Policy, and International Security there. He is the author of the New York Times bestseller Playing to the Edge.