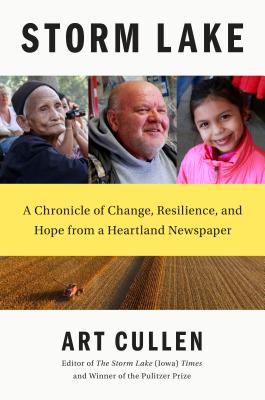 A Chronicle of Change, Resilience, and Hope from a Heartland Newspaper

"A reminder that even the smallest newspapers can hold the most powerful among us accountable." --The New York Times Book Review

“[The Storm Lake Times has an] unwavering commitment to elevating the community… Not the enemy of the people but a voice for the people.” --Beto O’Rourke, Democratic Presidential Candidate, via Instagram

From a Pulitzer-winning newspaperman, an unsentimental ode to America's heartland--a story of reinvention and resilience, environmental and economic struggle, and surprising diversity and hope.

When The Storm Lake Times, a tiny Iowa twice-weekly, won a Pulitzer Prize for taking on big corporate agri-industry for poisoning the local rivers and lake, it was a coup on many counts: a strike for the well being of a rural community; and a triumph for that endangered species, a family-run rural news weekly.

In this candid and timely book, Cullen describes how the heartland has changed dramatically over his career, as seen from the vantage point of a farming and meatpacking town of 15,000 in Northwest Iowa. Politics, agriculture, the environment, and immigration are all themes in Storm Lake, a chronicle of a resilient newspaper, as much a survivor as its town.

Iowa plays an outsize role in national politics. Iowa introduced Barack Obama and voted bigly for Donald Trump. Is the state leaning blue, red, or purple in the lead-up to 2020? Is it a bellwether for America? A nostalgic mirage from The Music Man, or a harbinger of America's future? Cullen's answer is complicated and honest--but with optimism and the stubbornness that is still the state's, and his, dominant quality.

Praise For Storm Lake: A Chronicle of Change, Resilience, and Hope from a Heartland Newspaper…

An Honoree of the Society of Midland Authors Literary Award

"Cullen’s book demonstrates the important role that local editors play in standing up and speaking to power in America...Storm Lake is an engaging, folksy read about how a small-town newspaper editor copes with existential threats to a way of life and an industry vital to American democracy in a state known for its extremes of weather, economics, and politics. [Cullen] tells good stories and writes with a journalistic flair that prefers punch to polish...The pages of Storm Lake clearly demonstrate why Cullen won journalism’s most revered prize."—The National Book Review

"With a self-effacing, homespun honesty...Cullen makes an eloquent case that community newspapers are integral to the fabric of small towns..[and] that diversity is keeping Storm Lake alive. Many Latino, Laotian and Vietnamese families work in the packinghouses. Cullen argues that these families have thrown a much-needed life preserver to Storm Lake’s economy."—StarTribune

“An engaging storyteller, Cullen recounts the deeds (and misdeeds) of youth, but his writer's passion shines when he discusses the events that led him to write the prize-winning editorials. . . The moral, economic, and social history of a small town in Iowa might not seem like much of a story, but in Cullen's hands, it is.”—Booklist

"Storm Lake is a must-read, and it is a great read."—WBUR

“An impassioned, significant book from a newsman who made a difference.”—Kirkus Reviews (starred)

“[A] memoir that gracefully illuminates the challenges facing the American heartland. Composed of political history, tales of civic controversies, and human interest stories, the subject matter is elevated by Cullen’s passion into parables relevant to all Americans . . . a window into small-town America.”—Publishers Weekly

“Read this book and you will understand why Art Cullen’s courageous writing—sensitive, challenging, sometimes abrasive—helped build Storm Lake into, as Cullen phrases it, ‘a community, not just an unrelated gathering of people.’ Cullen captures, in prose that is almost poetry, the ethos of small town, rural Iowa, the heart and soul of the ‘good America.’”—Tom Harkin, former United States Senator from Iowa

“Mechanization may have driven out small farmers, smothered the lake, and helped push the town paper to the edge of starvation, but Storm Lake has persevered, clutching its social fabric against the forces that have torn so much of the rural plains asunder. If you care about the future of the Republic, Art Cullen’s thoughtful, clear-eyed ode to his western Iowa hometown is not to be missed.” —Colin Woodard, author of American Nations: A History of the Eleven Rival Regional Cultures of North America and American Character: A History of the Epic Struggle Between Individual Liberty and the Common Good

“Art Cullen does not believe in the notion of fly-over country. He knows that Storm Lake is a place where hard working and community-minded people live, work, and play. He believes strongly that Storm Lake is worth writing about and fighting for, and you will too after reading Storm Lake.” —Tom Vilsack, former Governor of Iowa

“Pulitzer Prize winner Art Cullen embodies what community journalism is all about, which is an understanding—even love—of place and people, a determination to make things better and the backbone to challenge powerful interests. Cullen knows Iowa and a lot more. This book will delight you and inform you and surprise you. It will also give you hope. At a time when press freedoms are threatened and facts are in dispute, it is good to know that Cullen and his compatriots are standing guard.” —Dan Balz, Chief Correspondent, Washington Post, and author of the New York Times bestseller Collision 2012

“This is a cry from the heart from the heartland, and it is for those people on the coasts who think nothing important happens in the middle of the country. In fact, everything important that is happening pretty much anywhere in the country happens there--right there, around Storm Lake, in Iowa.” —John M. Barry, author of The Great Influenza and Rising Tide

Art Cullen is half the ownership and 25 percent of the news staff of The Storm Lake Times (founded by his brother John) and winner of the 2017 Pulitzer Prize for Editorial Writing for his editorials taking on corporate agribusiness for fouling the state's water and despoiling its soil. His commentaries on politics, immigration and the environment have been published by The New York Times, The Washington Post and The Guardian, along with regional newspapers and news sites. Cullen has been profiled by National Public Radio, Katie Couric, and CNN, and has served as a guest political analyst on MSNBC. This is his first book.
Loading...
or
Not Currently Available for Direct Purchase