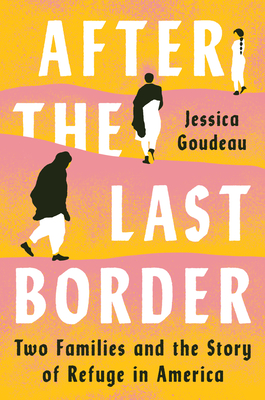 After the Last Border

"Simply brilliant, both in its granular storytelling and its enormous compassion" --The New York Times Book Review

The welcoming and acceptance of immigrants and refugees have been central to America's identity for centuries--yet America has periodically turned its back in times of the greatest humanitarian need. After the Last Border is an intimate look at the lives of two women as they struggle for the twenty-first century American dream, having won the "golden ticket" to settle as refugees in Austin, Texas.

Mu Naw, a Christian from Myanmar struggling to put down roots with her family, was accepted after decades in a refugee camp at a time when America was at its most open to displaced families; and Hasna, a Muslim from Syria, agrees to relocate as a last resort for the safety of her family--only to be cruelly separated from her children by a sudden ban on refugees from Muslim countries. Writer and activist Jessica Goudeau tracks the human impacts of America's ever-shifting refugee policy as both women narrowly escape from their home countries and begin the arduous but lifesaving process of resettling in Austin--a city that would show them the best and worst of what America has to offer.

After the Last Border situates a dramatic, character-driven story within a larger history--the evolution of modern refugee resettlement in the United States, beginning with World War II and ending with current closed-door policies--revealing not just how America's changing attitudes toward refugees have influenced policies and laws, but also the profound effect on human lives.

Praise For After the Last Border: Two Families and the Story of Refuge in America…

“Required reading for anyone trying to understand the challenges of getting to and surviving in the United States in the Trump era…What makes this book so different from other works that tell similar stories is the talent and doggedness of Goudeau, who…brings an insider’s authority to the page.” --The New York Times Book Review

"Thorough reporting combined with a novelistic attention to detail and plot create a work of nonfiction that reads like the best novels…deeply moving.” --San Francisco Chronicle

"Jessica Goudeau...has done what few journalists and fewer policymakers have been able to accomplish: bring the extraordinary tales of two war survivors...into the everyday normality of life in the United States . . . Goudeau approaches these contentious issues as a gifted storyteller and diligent reporter, carefully building a historical backdrop while also following the stories of Mu Naw and Hasna where they lead, without smoothing the rough parts or making the women sentimental archetypes.” --World Magazine

"Absolutely breathtaking. A story of the unbelievable resilience of two refugee families, worlds apart, and the desperate humanitarian crisis that brought them to our doorstep." —Kate Bowler, New York Times bestselling author of Everything Happens For a Reason: And Other Lies I’ve Loved

“After the Last Border is the rarest of books: a history, and collection of stories, that manages to be both deeply moving and deeply explanatory of a system that's foundational to our national identity. It feels like the culmination of a decade of work and friendship with refugees who trusted Goudeau enough to tell the stories. It feels like the work of a writer with a PhD and a deep, detailed understanding of the American project. It feels like that because that is precisely who Goudeau is: a person uniquely capable of writing this necessary book.” —Anne Helen Petersen, senior culture writer at BuzzFeed News and author of Too Fat, Too Slutty, Too Loud

"After the Last Border is a tale of our times and for our times…Goudeau is not merely reporting; she is writing from a place of friendship, care, and heart." —Kao Kalia Yang, author of Latehomecomer: A Hmong Family Memoir

"LOVELY… Jessica Goudeau's spectacular writing turns the struggles of each family into saga, enabling us to feel their predicaments and their progress as our own. The author does full justice to the sweeping drama of resettling from one side of the globe to the other. This is a captivating book about bravery, dislocation, and human resilience." —Helen Thorpe, author of The Newcomers: Finding Refuge, Friendship, and Hope in America

"Profound, electric, and necessary. These two closely observed stories of women who have been duped by the American dream is our universal crisis. Goudeau skillfully blasts open our eyes to the plight of humans treated like cattle on the road to “salvation.” —Sophia Shalmiyev, author of Mother Winter

"Goudeau, a gifted listener and writer, [takes] readers deep into the love, faith, loss, and astonishing strength of families who endure horror but never surrender hope. The result is an inspiring work of great beauty and profound humanity. You’ll find yourself unable to put this book down and wishing that every American reads it, too. This is the kind of storytelling about refugee experiences that the world needs now." —Wendy Pearlman, author of We Crossed a Bridge and It Trembled: Voices from Syria

"A revelatory and compassionate account…At a time when it is more important than ever to recognize that closed borders shrinks a country's moral compass, After the Last Border reminds us of the human cost, seen through the heartbreaking stories of Mu Naw and Hasna." —Sarah Weinman, author of The Real Lolita

"After the Last Border is essential reading for this moment; skillfully weaving in her meticulously-researched history of refugee resettlement in the United States, Jessica Goudeau tells a gripping, fast-paced story of trauma, struggle, and the fierce hope of those who cross borders for the sake of their children. Read it with tissues close by." —Amy Peterson, author of Where Goodness Still Grows: Reclaiming Virtue in an Age of Hypocrisy

“After the Last Border is a powerful testament to the US refugee resettlement system. By illuminating the journey of two families, and delineating the history and scope of refugee resettlement in the United States, Goudeau illustrates the perilous journeys refugees undertake, and the critical importance and ethical imperative of the US resettlement program. In this political moment, when embracing those fleeing from war and violence is being replaced by walls and policy barriers designed to keep people out, Ms. Goudeau’s book reminds us of what is at stake, and reminds us that this is not who we have been, and not who we are.” —Russell A. Smith, LMSW, CEO of Refugee Services of Texas

“In After the Last Border, Jessica Goudeau has written a history of refugee resettlement in the United States that is masterful in its sweep and novelistic in its attention to the human details that animate that history. I read it transported, appalled, and inspired by the courage of the refugees whose stories she so vividly tells. After the Last Border should be required reading for any US citizen: it is stories like these that allow us to understand who and what we are as a nation.” —Louisa Hall, author of Speak

“Jessica Goudeau's reporting and storytelling in After the Last Border are extraordinary, giving her the abilities to grab ahold of the reader and make them see connections between policies and people. This is nonfiction that reads as dramatic and grand as the best fiction. You cannot read this book and remain unchanged.” —Pamela Colloff, New York Times Magazine staff writer & ProPublica senior reporter

“A richly detailed account of the resettlement experiences of two women granted refugee status in the US . . . Her excellent interview skills and obvious empathy for her subjects make the family portraits utterly engrossing, and the history sections provide essential context. This moving and insightful dual portrait makes an impassioned case for humane immigration and refugee policy.” —Publishers Weekly (starred review)

“It's obvious that Goudeau was able to gain the two women's trust…their histories emerge through alternating chapters broken up by excerpts that provide social and political background about American refugee resettlement from the nineteenth century to the present day. These profiles are sympathetic and ultimately profoundly moving.” —Booklist

Jessica Goudeau has written for The Atlantic, The Washington Post, Los Angeles Times, and Teen Vogue, among other places, and is a former columnist for Catapult. She produced projects for Teen Vogue ("Ask a Syrian Girl") and A Line Birds Cannot See, a documentary about a young girl who crossed the border into the United States on her own. She has a PhD in literature from the University of Texas and served as a Mellon Writing Fellow and Interim Writing Center Director at Southwestern University. Goudeau has spent more than a decade working with refugees in Austin, Texas and is the cofounder of Hill Tribers, a nonprofit that provided supplemental income for Burmese refugee artisans for seven years.
Loading...
or
Not Currently Available for Direct Purchase