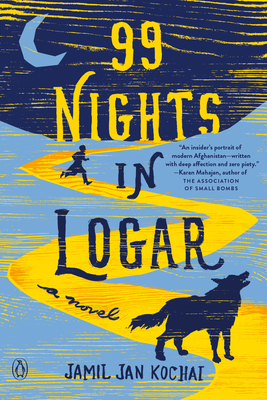 A dog on the loose. A boy yearning to connect to his family's roots. A country in the midst of great change. And a vibrant exploration of the power of stories--the ones we tell each other and the ones we find ourselves in.

Twelve-year-old Marwand's memories from his previous visit to Afghanistan six years ago center on his contentious relationship with Budabash, the terrifying but beloved dog who guards his extended family's compound in the rural village of Logar. But eager for an ally in this place that is meant to be "home," Marwand misreads his reunion with the dog and approaches Budabash the way he would any pet on his American suburban block--and the results are disastrous: Marwand loses a finger, and Budabash escapes into the night.

Marwand is not chastened and doubles down on his desire to fit in here. He must get the dog back, and the resulting search is a gripping and vivid adventure story, a lyrical, funny, and surprisingly tender coming-of-age journey across contemporary Afghanistan that blends the bravado and vulnerability of a boy's teenage years with an homage to familial oral tradition and calls to mind One Thousand and One Nights yet speaks with a voice all its own.

Praise For 99 Nights in Logar: A Novel…

“99 Nights in Logar is crafted with care, respect and a hard-earned and profound understanding of its readership. It is funny, razor-sharp and full of juicy tales that feel urgent and illicit, turning the reader into a lucky, trilingual fly on the wall in a family loaded with secrets and prone to acquiring more. . . . The ensuing adventure is witty and engaging, somewhat allegorical, thrumming with histories of foreign wars and with memories of lives lost and childhoods cut short. . . . The author has created a singular, resonant voice, an American teenager raised by Old World Afghan storytellers. . . . Kochai has created an exciting and true voice.”
—New York Times Book Review

“A funny, lightly surreal evocation of life in rural Afghanistan . . . driven by a profusion of tales within tales, which begin and break off, resume and recur, swerve or blossom into one another. . . . The magical elements don’t seem so much more far-fetched than the drones in the sky, and the book’s comic register turns out to be wildly elastic . . . help[ing to] restore a sense of the weight and substance of individual Afghan lives for readers so inured to the large numbers of reported deaths over many years.”
—Harper's Magazine

“Kochai weaves together a tapestry of stories to present a captivating image of the country that has been called ‘the graveyard of empires.’ . . . [He] maintains a playful humor in Marwand’s voice, channeling something like One Thousand and One Nights meets The Sandlot, and we feel as if we are watching the coming-of-age of a real boy. . . . A bulwark against exoticism that reminds us that if we can treat stories with respect, we have a better chance of respecting the lives those stories serve.”
—TIME

“[For] lovers of literary fiction . . . Filled with adventure and seen through the eyes of twelve-year-old Marwand, Jamil Jan Kochai’s 99 Nights in Logar follows the young boy’s journey across present-day Afghanistan in search of Budabash, the family dog that has escaped.”
—Southern Living

“A story full of humor and heart.”
—Buzzfeed

“The use of embedded stories gestures to a tradition of oral storytelling. Even more satisfying is the novel’s attention to the textures of Afghan family life and to the ways that the boys integrate their American and Afghan identities—thrilling to American movies but also praying and holding hands in male friendship.”
—The New Yorker

“It’s something more than well crafted; it’s phenomenal. . . . But this is more than a coming-of-age novel. It delves into Afghanistan’s past by retelling its stories, as Marwand’s adventures are punctuated by the tales that extended families tell each other. There are stories branching out of stories. . . . Many of these stories are breathtaking. Some are as scary as waiting for a bomb to fall, or for a lost son to return; others are as tender as a little flower that survives the Daisy Cutters. . . . Kochai’s book has a big heart.”
—Mohammed Hanif, The Guardian

“Ferocious, funny, rude, and freewheeling, 99 Nights in Logar is an insider’s portrait of modern Afghanistan—written with deep affection and zero piety. A brilliant and stylish debut.”
—Karan Mahajan, author of The Association of Small Bombs

“Imagine a twelve-year-old Don Quixote traversing a world full of absurdities and tragedies. Imagine The Arabian Nights set with America overshadowing an ancient landscape. 99 Nights in Logar is hilariously sad and heartbreakingly funny. Jamil Jan Kochai, a thrilling new writer, achieves in this book that rare quality of a storyteller both ageless and contemporary.”
—Yiyun Li, author of Kinder Than Solitude

“99 Nights in Logar is a revelation, in every sense of the word. An intimate look at childhood, at an Afghan province, at people and places as they deserve to be known, in all their complications. This is a novel that mourns all that has been lost, and chases after what might still be recovered. A romp, a poem, a prayer, a song of childhood—like youth itself, the writing is all energy, adventure, and possibility. Jamil Kochai is an astoundingly talented writer, listen up.”
—Justin Torres, author of We the Animals

“As alive to the present as to the past, Jamil Jan Kochai has crafted a first novel of tremendous promise. 99 Nights in Logar unfolds with complexity and inventiveness, revealing the many ways each generation must contend with the decisions of the generations before. An auspicious debut that captures with great urgency what awaits the generation coming of age now.”
—Idra Novey, author of Those Who Knew

“An imaginative, enthralling, and lyrical exploration of coming home—and coming-of-age—set amid the political tensions of modern Afghanistan. . . . Kochai is a masterful storyteller.”
—Publishers Weekly

“Kochai captures the joys and the sorrows of life in Afghanistan, offering readers a glimpse into everyday life in a country whose people have grown so used to constant bombardment that they can differentiate between various types of IEDs by sound alone.”
—Booklist

“With beautiful prose that encompasses the brutality of life in Afghanistan without overshadowing the warmth of family, culture, and storytelling, Kochai delivers a gorgeous and kaleidoscopic portrait of a land we're used to seeing through a single, insufficient lens: the war on terror. A vivid and moving novel about heritage, history, and the family bonds that transcend culture.”
—Kirkus (starred review)

Jamil Jan Kochai was born in Pakistan and grew up in the United States. He has a master's in English from University of California, Davis and a bachelor's degree in English from California State University, Sacramento. He is currently attending the Iowa Writers' Workshop, and has been published in A Public Space and The Capilano Review.
Loading...
or support indie stores by buying on