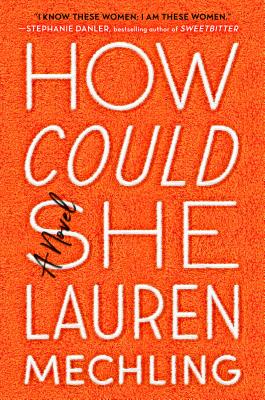 An assured and savagely funny novel about three old friends as they navigate careers, husbands, an ex-fiancé, new suitors, and, most importantly, their relationships with one another

After a devastating break-up with her fiancé, Geraldine is struggling to get her life back on track in Toronto. Her two old friends, Sunny and Rachel, left ages ago for New York, where they've landed good jobs, handsome husbands, and unfairly glamorous lives (or at least so it appears to Geraldine). Sick of watching from the sidelines, Geraldine decides to force the universe to give her the big break she knows she deserves, and moves to New York City.

As she zigzags her way through the downtown art scene and rooftop party circuit, she discovers how hard it is to find her footing in a world of influencers and media darlings. Meanwhile, Sunny's life as an It Girl watercolorist is not nearly as charmed as it seemed to Geraldine from Toronto. And Rachel is trying to keep it together as a new mom, writer, and wife--how is it that she was more confident and successful at twenty-five than in her mid-thirties? Perhaps worst of all, why are Sunny and Rachel--who've always been suspicious of each other--suddenly hanging out without Geraldine?

Hilarious and fiercely observed, How Could She is an essential novel of female friendship, an insider's look into the cutthroat world of New York media--from print to podcasting--and a witty exploration of the ways we can and cannot escape our pasts.

Praise For How Could She: A Novel…

“[How Could She is] both a satire of the 21st-century media world—with its podcasts, tastemakers, and print products on life support—and an emotional accounting of changed friendship and aspirations.”
—The New York Times

“Precise and of-the-moment. . . .  A delectably uncomfortable time capsule of our post-aughts selves and the honest struggles that lurk inside the hearts of women everywhere.”
—Vogue

“This wily send-up of NYC’s high-flying media elites proves that hell is a party filled with velvet-clad single men. A trio of 30-something BFFs drift apart and back together amid ego-bruising soirées and dubious alliances. Mechling poses the age-old question: Do men work better as soul mates or accessories?”
—O, the Oprah magazine

“With the big-hearted psychological acuity of Meg Wolitzer and the keen social scrutiny of Edith Wharton, Mechling probes what’s thorny and brutal about female friendships while also affirming just how ferociously important they are.”
—Esquire

“Fifteen years after the finale of Sex and the City, our collective appetite for stories of highly ambitious female friends living, laughing, and loving in New York City hasn’t waned one bit. . . . This summer’s living proof of that concept is the bitingly funny and often painfully realistic How Could She.”
—Entertainment Weekly

"For when you want a book to match your Aperol Spritz . . . enter Lauren Mechling's How Could She. . . . An inside look at female friendships—and betrayals."
—The Skimm

“Mechling captures the prickly feelings of possessiveness and isolation that creep in when two people in a triangle—even a platonic one—draw close, shutting out the third. Add to that the stress of trying to make a living when you’re a woman on the far side of 30, in a field that’s almost no longer a field yet is still dominated by men. How Could She has a vibrant modern energy, and it gets how hard it can be to preserve friendships when we’re so busy going after everything else we want in life.”
—Time

“Wit and spritzy entertainment. . . . In the lineage of Candace Bushnell’s Sex and the City and, well before that, Edith Wharton’s novels of New York status-striving, How Could She is enjoyably rich in taxonomic details. . . . The ever-shifting media landscape is a fitting backdrop for Ms. Mechling’s trenchant look at the subjective nature of status envy.”
—Sam Sacks, The Wall Street Journal

“In How Could She, Lauren Mechling captures the power dynamics, competitiveness, and beauty of female friendships.”
—Real Simple, "The Best Books of 2019 (So Far)"

"[A] compulsively readable page-turner about three friends—one just went through a breakup with her fiancé, one is struggling to keep it together as a new mom, and one is aging out of her It Girl persona. The thing is, they all think the others have perfect lives."
—Cosmopolitan

“Smart novels about adult friendship are so, so, so hard to find that this very 2019 novel . . . is destined to become the book you turn to when you can’t decide whether to hug or throttle your suddenly successful best friend.”
—Vulture

“People will be drawn to [How Could She] because it’s a story about adult friendship. . . .  How Could She drops into midlife for three women. . . . Each one trying to renegotiate her past as a means to getting somewhere else in the future. And in the process, they all have to navigate their increasingly complicated ties to one another.”
—Goop

“Drop [this] into your beach bag: Lauren Mechling’s keenly observed How Could She . . . examines how both fulfilling and fraught female friendships can be.”
—Marie Claire

“Engrossing. . . . Sharply funny. . . . Change isn’t always pretty for these women, but Mechling deftly captures the excitement and wisdom that come along with it.”
—Martha Stewart Living

“There’s nothing like a trio of female friends, and their shifting allegiances and two-versus-one dynamics, to remind you that life truly is a lot like high school. Mechling weaves the stories of three women . . . as they figure out their lives in NYC. These three will intrigue you at times, annoy you at others and, best of all, make you laugh out loud.”
—Catherine Hong, Family Circle

“The joy in Lauren Mechling's novel comes in the details. Mechling's novel follows three old friends, all turning 37, as they face professional and personal crossroads. Their New York social circle, ambitions, and personalities are so specifically rendered you'll be convinced by the end that you know Geraldine, Sunny, and Rachel."
—Refinery 29

“Brilliant. . . . An incisive, brutally funny look at one year in the lives of three close friends. . . . This is the perfect summer read.”
—Nylon

“If #relatable is your main criterion for reading material, then why not try the novel that earned the endorsement from Sweetbitter author Stephanie Danler: ‘I know these women; I am these women.’ . . .  We've all been disappointed by our crappy lives and lusted after others' brighter-looking ones, haven't we?”
—Elle.com

“Brilliantly titled. . . . Mechling focuses on jealousy motivated by vanity and cruelty. . . . The novel does not render an emotional world that brings us to our knees. It’s more like she’s making a case for rejiggering chick lit as the cruelest genre. . . . Completely satisfying.”
—Kaitlin Phillips, Bookforum

“A modern twist on the ‘just moved to New York’ story by focusing on three women in their mid-thirties, stumbling through their lives while trying to keep up appearances.”
—Town & Country

“[A] brilliant new novel. . . . [Mechling is] one of our most intelligent and honest cultural writers . . . in the same league as Nora Ephron and Laurie Colwin.”
—The Observer

“[How Could She] chronicles the complicated and awkward dissolution of friendships. . . . The bonds between Mechling’s characters were forged in the irradiant light and heat of their early working years. . . . Insecurities and rivalries creep in, eventually taking centre stage in the theatre of friendship.”
—The Globe and Mail

“Mechling does a remarkable job portraying the shifting realignments of the women’s loyalties. . . . [How Could She] manages to nail our moment in time.”
—am New York

“Devastating, reliably hilarious. . . . Perhaps what’s most striking about How Could She is the way in which Mechling has written a novel that is simultaneously about connection and alienation, unspoken social codes and explicitly laid out rules of interpersonal engagement.”
—Nylon

“Lauren Mechling has a gift for creating elaborate, realistic pretense and then marching straight through it with a machete, slicing it to bits in a way that is both shocking and frankly fun. . . . Mechling excels at creating realistically complex hopes, needs, and disappointments. . . . How Could She is the perfect summer read. It’s entertaining, insightful, and at times agonizingly true to life.”
—BookPage

“On every long list of summer reads should be a juicy female friendship story. . . . This is the one for 2019. . . . A painfully yet shrewdly relatable story of the trials and tribulations of adulting with friends who are all at different stages in life.”
—Women’s Health

"As soon as I finished this book, I wanted to send it to my closest friends and talk about our own relationship struggles over a glass of wine."
—She Reads

"A sharp dissection of the fraught dynamics of 30-something female friendship. . . . [The characters'] relationships to each other are delicate and often painful but also essential to their understanding of their own adult lives. . . . There is a profound and wistful melancholy at [How Could She's] core. . . . Emotionally astute; a pleasure."
—Kirkus Reviews (starred review)

"Mechling's whip-smart portrait of female friendship is perfect for fans of Meg Wolitzer's The Interestings. . . . Mechling excavates the layers of envy, support, and respect that fill the cracks of any long-term relationship. With an insider's view of today's media landscape, How Could She is a delight."
—Booklist

“Mechling turns a sharp eye on the relationships between women in her first adult novel. . . . [She] is particularly insightful when it comes to the envy and affection that marks friendship. . . . A breezy, entertaining romp.”
—Publishers Weekly

"Lauren Mechling's portrait of the ramifications of female friendship is so razor-sharp and accurate I found myself wincing as I read. I know these women; I am these women: flawed, conspiring, neurotic, and loving. Very few writers can entertain and still reveal deep pathos--Mechling has done it flawlessly."
—Stephanie Danler, bestselling author of Sweetbitter

"What a hilarious, devastating, yet humane representation of a gratifyingly specific slice of New York life! How Could She is at once a compulsively readable catalogue of 'painfully curated' (Mechling's phrase) outfits, menus, emails, guest lists, and magazine assignments, a true-and mysterious-feeling portrayal of the way friends' relative statuses fluctuate over time, and as wise and unforgiving as a nineteenth-century French novel."
—Elif Batuman, author of Pulitzer Prize finalist The Idiot

"Lauren Mechling's sophisticated new novel dives right into those stickiest parts of women's inner lives, their friendships with each other. Mechling's observations are vivid and fresh, and this book will win her many a fan."
—Emma Straub, New York Times bestselling author of The Vacationers

“Lauren Mechling’s debut is at once a portrait of three very real women and a wry send up of the times in which we live. Witty but never too wicked, cutting but never too cruel, How Could She is a thoroughly modern comedy of manners.”
—Rumaan Alam, author of Rich and Pretty and That Kind of Mother

"There doesn't begin to be enough fiction centered on friendships, especially friendships among women. Profound, radiantly alive, insightful, large-hearted, Lauren Mechling's How Could She goes a long way toward addressing this. Mechling's novel is vital reading."
—R. O. Kwon, author of The Incendiaries

"How Could She is so much sheer fun, such pure joy to read, that it wasn't until I finished the final page that I fully understood how profound it is. Mechling's dissection of a three-way female friendship is tender and brutal, lighthearted and fierce, warm-hearted and unsparing, wise and satirical—a triumphant literary debut."
—Kate Christensen, author of The Last Cruise

"A cunning, witty book. How Could She satirizes New York's cultural elite and tells a brutally honest story about the fluctuations of power between friends; Lauren Mechling is an obvious heir to Nora Ephron."
—Catherine Lacey, author of Certain American States