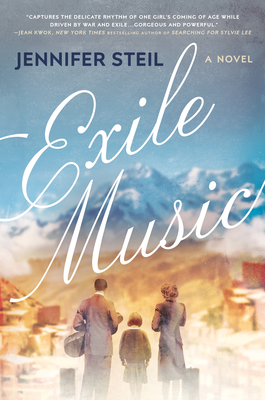 Based on an unexplored slice of World War II history, Exile Music is the captivating story of a young Jewish girl whose family flees refined and urbane Vienna for safe harbor in the mountains of Bolivia

As a young girl growing up in Vienna in the 1930s, Orly has an idyllic childhood filled with music. Her father plays the viola in the Philharmonic, her mother is a well-regarded opera singer, her beloved and charismatic older brother holds the neighborhood in his thrall, and most of her eccentric and wonderful extended family live nearby. Only vaguely aware of Hitler's rise or how her Jewish heritage will define her family's identity, Orly spends her days immersed in play with her best friend and upstairs neighbor, Anneliese. Together they dream up vivid and elaborate worlds, where they can escape the growing tensions around them.

But in 1938, Orly's peaceful life is shattered when the Germans arrive. Her older brother flees Vienna first, and soon Orly, her father, and her mother procure refugee visas for La Paz, a city high up in the Bolivian Andes. Even as the number of Jewish refugees in the small community grows, her family is haunted by the music that can no longer be their livelihood, and by the family and friends they left behind. While Orly and her father find their footing in the mountains, Orly's mother grows even more distant, harboring a secret that could put their family at risk again. Years pass, the war ends, and Orly must decide: Is the love and adventure she has found in La Paz what defines home, or is the pull of her past in Europe--and the piece of her heart she left with Anneliese--too strong to ignore?

Jennifer Steil is the author of two previous books, The Woman Who Fell from the Sky, a memoir of her experience as a journalist in Yemen, and The Ambassador's Wife, a novel about a hostage crisis that was also inspired by Steil's own experience. She currently lives in Tashkent, Uzbekistan, with her husband and daughter.

Praise For Exile Music: A Novel…

Praise for The Ambassador's Wife

“A novel of love, deception and consequences. . . . Richly imagined. . . . Harrowing and brilliant.”
—The Seattle Times

“Thrillingly suspenseful and deeply sensuous. . . . Steil deftly conducts us into the private and public rooms of the diplomatic world, the complicated aspirations of modern young women living behind the veil, the unfolding of a very private love story—and best of all, into the consciousness of the fiery and idiosyncratic artist who becomes the ambassador’s wife. Captivating, unforgettable.”
—Janet Fitch, author of White Oleander

“A gritty and ground-level thriller by an author who is herself the wife of a diplomat,”
—Lit Hub

“A fast-paced novel of marital love and the bonds of women’s friendships against the backdrop of intrigue in the Middle East.”
—Booklist

“Jennifer Steil’s memorable heroine confronts the confines of privilege, the fear of death, the temptations of the white savior complex, and the limits of cross-cultural connection in this detailed, thoughtful debut.”
—Joy Castro, author of Island of Bones

“The Ambassador’s Wife illuminates a very intimate, and feminine, face of terror. Jennifer Steil has lived among artists, journalists, diplomats, and women desiring empowerment in one of the most terror-ridden corners of the Middle East. This is a story only she can tell, and she does so with great clarity, phenomenal insight, and wondrous grace. The rarest of books, this is a thriller about the heart.”
—Moira Crone, author of The Ice Garden

“Be warned: once you embark on this hypnotic magic carpet ride of a book, you won’t be able to stop. Jennifer Steil is a modern-day Scheherazade, who seamlessly weds lyricism, mystery and a reporter’s eye for detail. The Ambassador’s Wife is as deeply compassionate as it is thrilling.”
—Jillian Lauren, author of Some Girls: My Life in a Harem

“An extraordinarily timely tale, completely gripping. . . . So much of the background, too, was familiar to me as a diplomat’s wife. I loved the book. I wish I had written it!”
—Brigid Keenan, author of Diplomatic Baggage: The Adventures of a Trailing Spouse
or
Pre-Order Now
Copyright © 2020 American Booksellers Association