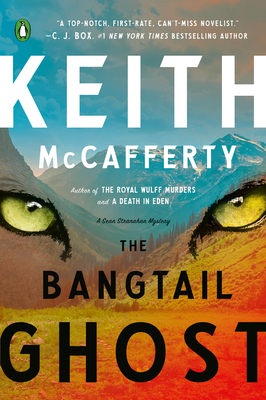 A Novel (A Sean Stranahan Mystery #8)

In Montana's Gravelly Range, paw prints and a single whisker discovered at a scene of horrific violence suggest a woman had been attacked and carried away by a mountain lion. Sheriff Martha Ettinger employs her fiancé, sometimes-detective Sean Stranahan, to put a name to the gnawed bones comprising all that is left of the body. The woman's is the first of several deaths that Sean suspects are not as easily explained as they appear. . As a reign of terror grips the Madison Valley, blood in the tracks will lead him from the river below to the snow-covered ridge tops, as Sean finds himself on his most adventurous and dangerous quest yet. For as he comes closer to unearthing the secret shared by the dead and missing, the tracks he is following will turn, and the hunter becomes the hunted.

Praise For The Bangtail Ghost: A Novel (A Sean Stranahan Mystery #8)…

Praise for Keith McCafferty and the Sean Stranahan mystery series

“Keith McCafferty gets the West just right... an impressive writer.” —Margaret Coel, New York Times bestselling author of The Man Who Fell From the Sky and Winter’s Child

"If you’re not reading Keith McCafferty because you don’t fly fish or because you don’t like mysteries or westerns, you need to get started because he’s just flat-out terrific." —Craig Johnson, author of the Walt Longmire novels, the basis for the Netflix drama Longmire

"Like Brad Smith and Elmore Leonard, McCafferty does a marvelous job of manipulating mood… A must for Craig Johnson and C.J. Box fans." —Booklist (starred)

“[Keith McCafferty] writes with heart and command of the story that sparkles on every page.” —Michael McGarrity, New York Times bestselling author of Backlands

“McCafferty nails the delicate balance between humor and heft in a genuine way.” —P.J. Tracy, New York Times bestselling author of Off the Grid

Keith McCafferty is the survival and outdoor skills editor of Field & Stream, and the author of The Royal Wulff Murders, The Gray Ghost Murders, Dead Man's Fancy, Crazy Mountain Kiss, which won the 2016 Spur Award for Best Western Contemporary Novel, Buffalo Jump Blues, Cold Hearted River, and A Death in Eden. Winner of the Traver Award for angling literature, he is a two-time National Magazine awards finalist. He lives with his wife in Bozeman, Montana.
Loading...
or support indie stores by buying on