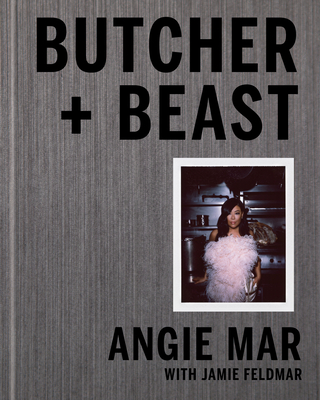 Mastering the Art of Meat: A Cookbook

The Beatrice Inn’s presence in New York City spans close to a century, and its history is ever changing, from one of New York’s first speakeasies, frequented by Fitzgerald and Hemingway, to a beloved neighborhood Italian restaurant to one of the city’s most notorious night clubs. Angie Mar purchased the Beatrice Inn in 2016 and led the storied landmark into its next chapter. Mar transformed the space and the menu into a stunning subterranean den where guests are meant to throw caution to the wind and engage in their most primal of senses. Pete Wells, in his rave two-star New York Times review, summed it up best: “It is a place to go when you want to celebrate your life as an animal.”

Now, in Mar’s debut cookbook, the Beatrice Inn experience will resonate with readers no matter where they live. Butcher and Beast invites readers into this glamorous, gutsy, and forever-nocturnal world. Mar’s unconventional approach to flavor profiles are captured in over 80 recipes, including Milk-Braised Pork Shoulder, Duck and Foie Gras Pie, Venison Cassoulet, and Bone Marrow–Bourbon Crème Brûlée. Throughout are also essays on Mar’s controversial and cutting-edge dry-aging techniques, her adoration of Champagne, the reality of what it takes to lead in the New York City restaurant scene, and the love and loyalty of her tight-knit family. Visually arresting photography shot entirely on Polaroid film captures the elegant and ever-opulent world of the Beatrice Inn.

Praise For Butcher and Beast: Mastering the Art of Meat: A Cookbook…

“In a time when plant-based diets feel omnipresent, Angie Mar stands to prove that big, red meat is still very much in style.”—Vogue

“At New York’s iconic Beatrice Inn, [Angie’s] menu ranges from 75 Day Lavender Aged Butcher’s Steak to Muscadet Vine Smoked Rabbit. So it should come as no surprise that her debut cookbook, Butcher and Beast, showcases that passion.”—Food & Wine

“The hulking tome is a raw tribute to her storied eatery, each page resembling a macabre Vogue spread.”—Artful Living

“This alluring collection of recipes from an exciting Manhattan chef will leave meat eaters salivating.”—Publishers Weekly

Angie Mar is the owner and executive chef at the Beatrice Inn in New York’s City’s West Village, which received a rave two-star review from Pete Wells in the New York Times. Best known for her innovative preparation of meats, Mar was named a 2017 Food & Wine Best New Chef and was a 2019 James Beard semifinalist for Best Chef: New York City.
Loading...
or support indie stores by buying on