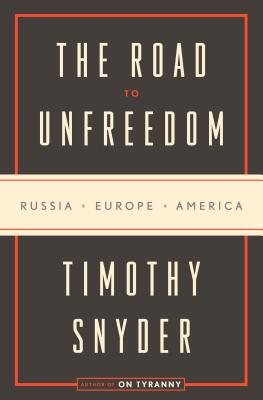 With the end of the Cold War, the victory of liberal democracy seemed final. Observers declared the end of history, confident in a peaceful, globalized future. This faith was misplaced. Authoritarianism returned to Russia, as Vladimir Putin found fascist ideas that could be used to justify rule by the wealthy. In the 2010s, it has spread from east to west, aided by Russian warfare in Ukraine and cyberwar in Europe and the United States.

Timothy Snyder is the Levin Professor of History at Yale University and the author of On Tyranny, Black Earth, and Bloodlands. His work has received the literature award of the American Academy of Arts and Letters, the Hannah Arendt Prize, and the Leipzig Book Prize for European Understanding. He lives in New Haven, Connecticut.
Loading...
or
Not Currently Available for Direct Purchase