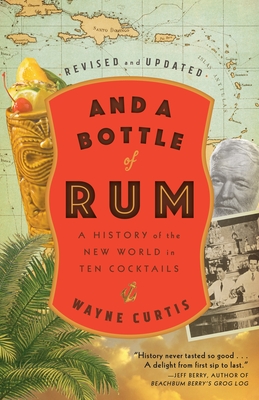 And a Bottle of Rum, Revised and Updated

A History of the New World in Ten Cocktails

Now revised, updated, and with new recipes, And a Bottle of Rum tells the raucously entertaining story of this most American of liquors

From the grog sailors drank on the high seas in the 1700s to the mojitos of Havana bar hoppers, spirits and cocktail columnist Wayne Curtis offers a history of rum and the Americas alike, revealing that the homely spirit once distilled from the industrial waste of the booming sugar trade has managed to infiltrate every stratum of New World society.

Curtis takes us from the taverns of the American colonies, where rum delivered both a cheap wallop and cash for the Revolution; to the plundering pirate ships off the coast of Central America; to the watering holes of pre-Castro Cuba; and to the kitsch-laden tiki bars of 1950s America. Here are sugar barons and their armies conquering the Caribbean, Paul Revere stopping for a nip during his famous ride, Prohibitionists marching against "demon rum," Hemingway fattening his liver with Havana daiquiris, and today's bartenders reviving old favorites like Planter's Punch.

In an age of microbrewed beer and single-malt whiskeys, rum--once the swill of the common man--has found its way into the tasting rooms of the most discriminating drinkers. Complete with cocktail recipes for would-be epicurean time-travelers, this is history at its most intoxicating.

Praise For And a Bottle of Rum, Revised and Updated: A History of the New World in Ten Cocktails…

Toasts to And a Bottle of Rum

“And a Bottle of Rum is a fascinating tale of cultural metamorphosis, tracing rum’s remarkable journey from colonial rotgut to SoHo cocktail. A book with as many revelations about American history as about this archetypally American drink.” —Jack Turner, author of Spice: The History of a Temptation

“History never tasted so good. What Herbert Asbury did for the gangs of New York, Wayne Curtis does for rum: The profiteers who traded it, the pirates who raided it, the underclass who guzzled it, the mixologists who exalted it, and the corporations who homogenized it—Curtis tells their tale with style and sweep in a tour de force of social history, urban anthropology, and cocktail ‘alcohology.’ A delight from first sip to last.” —Jeff Berry, author of Beachbum Berry’s Grog Log, Intoxica!, and Taboo Table

“And a Bottle of Rum reveals the facts behind rum’s colorful history while telling a great story of rebellion and rumbustion!” —Dale DeGroff, author of The Craft of the Cocktail

Wayne Curtis was the spirits and cocktails columnist for The Atlantic magazine for eight years, and has also written about drinks for the Wall Street Journal, Imbibe, The Daily Beast, and The American Scholar. In 2002 Curtis was named Lowell Thomas Travel Journalist of the Year by the Society of American Travel Writers. He lives in New Orleans and Maine.
Loading...
or support indie stores by buying on