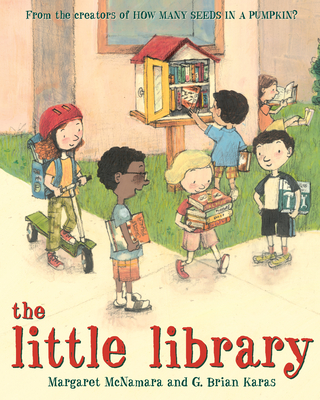 “I love this book with the fire of a thousand suns — I, too, was a slow reader when I was a kid, and it’s really nice to see this represented in a picture book in a positive way! Blending reading with woodworking is also a brilliant combination.”
— Kelsy April, Bank Square Books, Mystic, CT
View the List

Mr. Tiffin and his students from the perennially popular How Many Seeds in a Pumpkin? and The Dinosaur Expert make friends with, Librarian Beck a new character in the series who also happens to be non-binary. This thoughtful picture book is about a wood-working project that helps a young student become a book lover.

Everyone in Mr. Tiffin's class couldn't be more excited that the new school library has finally opened. Everyone except Jake. Jake is a slow and careful reader. Sometimes he reads the same page more than once to figure everything out. And he often feels left behind on class Library Day. All that changes when Librarian Beck notices Jake running his fingers across the grooves of a brand-new bookshelf and offers him an old, worn book: Woodworking for Young Hands. Jake checks the book out, studies the pictures and instructions, and renews the book again and again. When the school year comes to an end, Jake has the perfect gift idea for the librarian who changed his life--and he makes it with his own two hands.

Praise for The Little Library:

“A standout. Not only does Librarian Beck offer Jake compassionate encouragement… they also present as nonbinary with they/them pronouns and clothing and hairstyling that resist strict gender norms. The matter-of-fact inclusion of this character is groundbreaking.” —Kirkus Reviews, starred review

"Gently illustrating that every book has its reader, this story of a reluctant reader assisted by a helpful and welcoming librarian is another solid addition to Mr. Tiffin’s classroom series.” —School Library Journal

Praise for The Dinosaur Expert:

"A pivotal moment in a child's life, handled with grace and sensitivity rather than conflict or ineffective lecturing." —Kirkus, starred review

"This story is illustrated with great care and attention to detail from page one, and the text and artwork work together in harmony to bring home powerful messages about gender equality, evolving to improve, and being careful with the feelings of others." —School Library Journal, starred review

Margaret McNamara is the author of four other titles about Mr. Tiffin's class: A Poem in Your Pocket, called "a nimble introduction to poetry" by the New York Times; The Apple Orchard Riddle, said to "spark fruitful curriculum discussion" by School Library Journal; and How Many Seeds in a Pumpkin?, called "illuminating" by Family Fun magazine and The Dinosaur Expert, which received three starred reviews. She is also the author countless other picture books, including Vote for Our Future, which Kirkus Reviews called "essential" in a starred review. Ms. McNamara lives in New York City. Visit her on the Web at margaretmcnamara.net.

G. Brian Karas is the prolific, versatile, and award-winning illustrator of many books for children, including A Poem in Your Pocket, How Many Seeds in a Pumpkin?, The Apple Orchard Riddle and The Dinosaur Expert that received three starred reviews. He also illustrated A Hat for Mrs. Goldman by Michelle Edwards; Neville by Norton Juster; Clever Jack Takes the Cake by Candace Fleming, which received four starred reviews; Are You Going to Be Good? by Cari Best, a New York Times Best Illustrated Book; and Home on the Bayou, a Boston Globe-Horn Book Honor Book. Visit him at GBrianKaras.com.
Loading...
or support indie stores by buying on