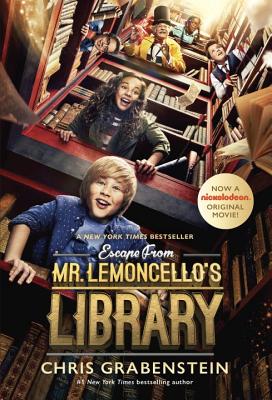 After over 100 weeks on the bestseller list and 42 state award lists, #1 New York Times bestselling author Chris Grabenstein's Escape from the Lemoncello's Library is now a Nickelodeon Original Movie!

Discover what James Patterson calls "the coolest library in all the world" in this tie-in edition that's perfect for new Lemoncello readers and longtime fans of the series alike. When Kyle learns that the world's most famous game maker has designed the town's new library and is having an invitation-only lock-in on the first night, he is determined to be there. But the tricky part isn't getting into the library--it's getting out. Kyle's going to need all his smarts, because a good roll of the dice or lucky draw of the cards is not enough to win in Mr. Lemoncello's library.

"Full of puzzles to think about, puns to groan at and references to children’s book titles, this solid, tightly plotted read is a winner for readers and game-players alike.” —Kirkus Reviews, Starred

“Librarians and English teachers will happily recommend this adventurous romp from Grabenstein . . . , which pays playful homage to books and libraries while engaging readers in a fast-paced competition.” —Publishers Weekly

“Book and game lovers alike will delve into this delicious tale and put on their thinking caps.” —School Library Journal

CHRIS GRABENSTEIN is the #1 New York Times bestselling author of Escape from Mr. Lemoncello’s Library, Mr. Lemoncello’s Library Olympics, The Island of Dr. Libris, the Welcome to Wonderland series, and many other books, as well as the coauthor of numerous page-turners with James Patterson, including the I Funny, House of Robots, and Treasure Hunters series and Word of Mouse. Chris lives in New York City with his wife, J.J. Visit ChrisGrabenstein.com for trailers and bonus puzzles, and find Chris on Twitter at @cgrabenstein.
Loading...
or support indie stores by buying on