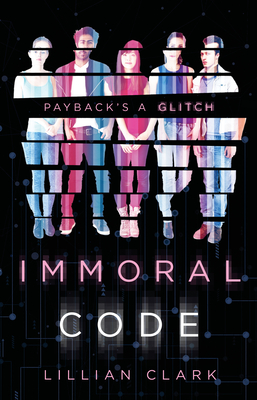 Ocean's 8 meets The Breakfast Club in this fast-paced, multi-perspective story about five teens determined to hack into one billionaire absentee father's company to steal tuition money.

For Nari, aka Narioka Diane, aka hacker digital alter ego "d0l0s," it's college and then a career at "one of the big ones," like Google or Apple. Keagan, her sweet, sensitive boyfriend, is happy to follow her wherever she may lead. Reese is an ace/aro visual artist with plans to travel the world. Santiago is off to Stanford on a diving scholarship, with very real Olympic hopes. And Bellamy? Physics genius Bellamy is admitted to MIT--but the student loan she'd been counting on is denied when it turns out her estranged father--one Robert Foster--is loaded.
Nari isn't about to let her friend's dreams be squashed by a deadbeat billionaire, so she hatches a plan to steal just enough from Foster to allow Bellamy to achieve her goals. Fast-paced and banter-filled, Lillian Clark's debut is a hilarious and thought-provoking Robin Hood story for the 21st century.

"A smart and fast-paced debut that will intrigue heist aficionados and modern-minded Robin Hoods."--Booklist

Lillian Clark, a graduate of the University of Wyoming, grew up riding horses, climbing trees, hiking, and going on grand imaginary adventures in the small-town West. She's worked as a lifeguard, a camp counselor, and a Zamboni driver, but found her eternal love working as a bookseller at an independent bookstore in what was once a brothel in historic downtown Laramie, WY. Now living with her husband, son, and two giant dogs in the Teton Valley of Idaho, she spends her snowy winters and sunny summers reading almost anything and writing books for teens. Learn more about Lillian online at LillianJClark.com and on Twitter at @LillianJClark.
Loading...
or
Not Currently Available for Direct Purchase