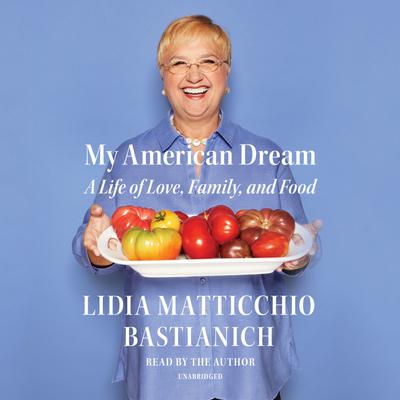 A Life of Love, Family, and Food

For decades, beloved chef Lidia Bastianich has introduced Americans to Italian food through her cookbooks, TV shows, and restaurants. Now, in My American Dream, she tells her own story for the very first time. Born in Pula, on the Istrian peninsula, Lidia grew up surrounded by love and security, learning the art of Italian cooking from her beloved grandmother. But when Istria was annexed by a communist regime, Lidia’s family fled to Trieste, where they spent two years in a refugee camp waiting for visas to enter the United States. When she finally arrived in New York, Lidia soon began working in restaurants, the first step on a path that led to her becoming one of the most revered chefs and businesswomen in the country. Heartwarming, deeply personal, and powerfully inspiring, My American Dream is the story of Lidia’s close-knit family and her dedication and endless passion for food.

LIDIA MATTICCHIO BASTIANICH is the author of thirteen cookbooks and the Emmy award-wining host of Public Television's Lidia's Kitchen which also airs internationally. She is also a judge on Masterchef Jr. Italy and Italy's highly rated daily program "La Prova del Cuoco". Lidia owns Felidia, Becco, several other restaurants, and is a partner in the acclaimed Eataly. She lives on Long Island, New York.