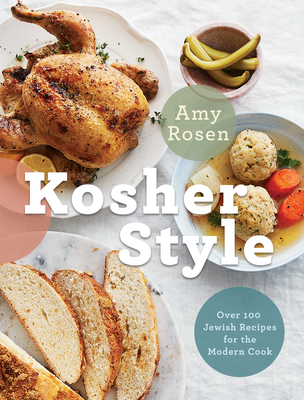 Over 100 Jewish Recipes for the Modern Cook: A Cookbook

For the bubbes and the balabustas, the keepers of Jewish kitchens and the enthusiastic neophytes, comes a cookbook that celebrates how many Jews eat today.

In the Jewish culture, as in many others, bubbes, saftas and nanas are the matriarchs of the kitchen and thus the rulers of the roost. They are culinary giants in quilted polyester muumuus and silk slippers who know how to make the Semitic linchpins cherished from childhood--the kugel, the gefilte fish, the matzah ball soup and the crispy-skinned roasted chicken. They all have their specialties but, of course, they won't be around to feed us forever, and that will be a loss indeed. But it will be an even bigger loss if the recipes we grew up on pass away with them, along with those special connections to our past. That's what prompted Amy Rosen, journalist and cookbook author, to spirit the classic recipes from her grandmothers and other role models into the 21st century. All of the dishes in Kosher Style are inspired by the tables and tales and chutzpah of the North American Jewish experience. They also happen to be kosher.
In this book are all the recipes you need for successful shellfish- and pork-free home entertaining, be it for a Jewish holiday or a workaday dinner. From crave-worthy snacks to family-size salads, soulful mains to show-stopping desserts, all of the recipes are doable in the home kitchen and are clearly marked as either a meat dish, dairy dish, or pareve (neutral). Think: Lacy Latkes & Applesauce, Sour Cream & Onion Potato Knishes, General Tso's Chicken, and Toblerone-Chunk Hamantaschen your family will plotz over. In addition to the classics, Amy has included some of her favorite modern recipes, like a Quinoa-Tofu Bowl with Greens & Green Goddess Dressing, Honey-Harissa Roasted Carrots and a Crisp Cucumber & Radish Salad.
Kosher Style is for anyone who likes to cook and loves to eat, and it's especially for those yearning to create new shared memories around a table brimming with history, loved ones and maple-soy brisket.

Praise For Kosher Style: Over 100 Jewish Recipes for the Modern Cook: A Cookbook…

“The traditional Jewish food of my ancestors, full of deeply-layered flavor and hearty preparation, is forever the standard by which all other comfort food is measured. That’s why I am thrilled to add Amy’s Kosher Style to my library. It’s a brilliant homage to what is possibly the tastiest food on earth, with recipes that are more relevant and satisfying than ever before. So eat, eat! I’m certain you’ll savor every bite for many years to come.”
—Gail Simmons, food critic, TV host and author of Bringing It Home: Favorite Recipes from a Life of Adventurous Eating

“Evoking memories of tables past, Amy Rosen has written a joyful cookbook with a modern approach. With her charming, witty style she draws you in—Jewish or not. You will love the stories, the ambience and the perfectly-tested recipes. Egg Cream, anyone?”
—Lucy Waverman, food writer and author of The Flavour Principle

“Amy is a woman after my own nostalgic heart. She means business in the kitchen with her hip spins on delicious Jewish classics. Rooted in the tried-and-true, hand-me-down recipes of her bubbes and nanas, Amy’s warm, imaginative eye catches me at every turn of the page. Breakfast, brunch, lunch, snack, dinner and dessert! I’d happily eat six meals if Amy’s PB&J bread pudding is on the table.”
—Christina Tosi, CEO, Chef and Founder of Milk Bar

“If this comprehensive cookbook of Jewish lore, Jewish love, Jewish language and even Jewish vegetarian chopped liver had come out when I was a child, I could have avoided the agony of attending Hebrew School. It’s a step-by-step guide to culinary bliss.”
—Alan Richman, James Beard Award–winning food writer

“Amy Rosen not only captures the food and flavor of the Jewish kitchen, she gives voice to the cuisine’s hilarious, frequently delicious soul; one that gives seemingly ordinary dishes a personality worthy of a biblical legend (or a great Seinfeld episode).”
—David Sax, author of Save the Deli

“A smart response to food industry news that more than 40 percent of packaged food in the U.S. now has kosher designation. Whether people are buying it for religious reasons, perceived cleanliness, dietary restrictions, or to avoid allergens like shellfish, kosher cooking is highly crave-worthy. Her collection of nostalgic, bubbe-approved recipes includes latkes, kugel and matzah ball soup, plus her own kosher spins like quinoa-tofu bowls and honey-harissa roast veg.”
—Chatelaine

AMY ROSEN is a James Beard Award-nominated, award-winning freelance journalist. She is the editor of Modern Farmer magazine and contributes regularly to enRoute, The Globe and Mail and Food & Drink, among others. She is the author of five books, including the bestselling Toronto Cooks and its follow-up, Toronto Eats. Amy is also the founder of Rosen's Cinnamon Buns. She lives in Toronto.
Loading...
or
Not Currently Available for Direct Purchase