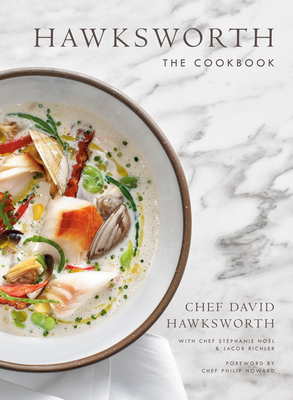 From acclaimed and multi award-winning Chef David Hawksworth comes a stunning collection of the exquisite recipes that brought him to the top of Canada's culinary world.

As a leader in contemporary Canadian cuisine, Chef Hawksworth's restaurants, Hawksworth and Nightingale, have been fixtures of Vancouver's dining scene for the past 10 years, aweing diners with the intricate, beautiful and refined dishes that have become synonymous with his name. In this book, he shares for the first time the artfully developed recipes that have brought him unparalelled success over the years, and challenges readers to recreate these dishes for an unforgettable dining experience.

Hawksworth is a celebration of Chef Hawksworth's career to date, with recipes ranging from his time training in London with Michelin-starred chefs, to Ouest, the first restaurant where he served as head chef, to opening his own fine dining restaurant. The book's simpler and more casual recipes reflect the family-style dishes served at Nightingale and the casual fare of Bel Café (a downtown lunchtime go-to destination). The recipes included require varying levels of skill and time commitments, from weekday meals like Crispy Buttermilk Fried Chicken & Pickled Ramps Ranch to show-stopping feats of culinary skill like Wagyu Beef Carpaccio with Piquillo Pepper, Parsley, and Beef Tendon. Casual foodies and adventurous cooks alike will find new culinary pleasures with Chef Hawksworth as their guide.

CHEF DAVID HAWKSWORTH is widely regarded as one of North America's greatest chefs. Born and raised in Vancouver, he spent a decade training at Michelin-starred restaurants in the UK, such as Le Manoir aux Quat'Saisons, L'Escargot, and The Square. He returned to Vancouver in 2000 and took his first Head Chef position at Ouest (later renamed West). In 2008 he became the youngest chef inducted into the BC Restaurant Hall of Fame. Chef Hawksworth opened his eponymous restaurant in 2011, at the Rosewood Hotel Georgia. It was named 2012 and 2013 Vancouver Magazine Restaurant of the Year and Chef of the Year, followed by five consecutive wins for Best Upscale Dining, and was in enRoute magazine's top three Best New Restaurants, and as Maclean's magazine's Restaurant of the Year. Chef Hawksworth opened his second restaurant, Nightintale, in 2013. He also operates two locations of Bel Café, Hawksworth Catering, the Hawksworth Young Chef Scholarship Foundation, and an exclusive culinary partnership with Air Canada.

Praise For Hawksworth: The Cookbook…

Praise for Hawksworth The Cookbook:
“Chef Hawksworth has been a force in the Canadian culinary industry for over two decades. He is a leader in contemporary cuisine, always striving for perfection
in his dishes, and pushing boundaries with unique Pacific Coast ingredients. This cookbook showcases his exceptional style, which has made his restaurants—Hawksworth and Nightingale—foundations of Vancouver’s dining scene. The incredible dishes in this book reflect his hands-on approach, and the many years of dedication to his craft.” —CHEF MARK MCEWAN

“I have been a fan of Chef David Hawksworth’s precise French school-style, and Pacific Northwest ingredient-driven cuisine for over 20 years. This book is an incredible tool, full of secrets and techniques, for all cooks to up their game—at home and at work. Well played.” —CHEF DAVID MCMILLAN, JOE BEEF RESTAURANT GROUP


Praise for David Hawksworth:
"[Chef Hawksworth's] much-lauded cuisine blended a deep admiration for fresh, regional, seasonal ingredients with a mastery of classic techniques acquired from a decade in some of Britain's most acclaimed kitchens."—Alexandra Gill, The Globe and Mail

"Chef Hawksworth's cooking techniques are of the finest pedigree, never deployed for flash and attention but only to achieve the best result."—Nuvo

"David Hawksworth's compositions are playful, artistically colourful, and feature bold flavours, along with an increasing--nearly Asian--preoccupation with texture and mouth feel."—Maclean's

Praise for Hawksworth restaurant:
"Reaffirming itself as one of the city’s elite rooms is Hawksworth, where David Hawksworth and executive chef Quinton Bennett are likewise turning out ingredient-driven treatises on locavorism in the most elegant room in town, usually packed with the city’s who’s who."—Vancouver Magazine
or support indie stores by buying on
Copyright © 2020 American Booksellers Association