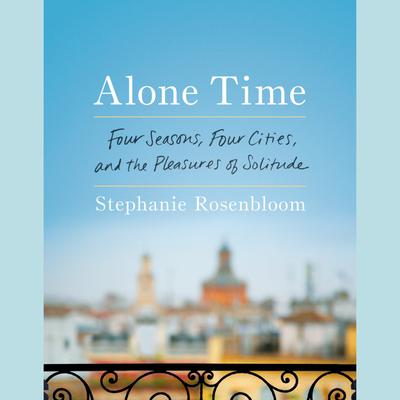 Four Seasons, Four Cities, and the Pleasures of Solitude

"In Paris (or anywhere else, really) a table for one can be a most delightful place." --Alone Time, as seen in The New York Times

A wise, passionate account of the pleasures of traveling solo

In our increasingly frantic daily lives, many people are genuinely fearful of the prospect of solitude, but time alone can be both rich and restorative, especially when travelling. Through on-the-ground reporting and recounting the experiences of artists, writers, and innovators who cherished solitude, Stephanie Rosenbloom considers how being alone as a traveller--and even in one's own city--is conducive to becoming acutely aware of the sensual details of the world--patterns, textures, colors, tastes, sounds--in ways that are difficult to do in the company of others.

Alone Time is divided into four parts, each set in a different city, in a different season, in a single year. The destinations--Paris, Istanbul, Florence, New York--are all pedestrian-friendly, allowing travelers to slow down and appreciate casual pleasures instead of hurtling through museums and posting photos to Instagram. Each section spotlights a different theme associated with the joys and benefits of time alone and how it can enable people to enrich their lives--facilitating creativity, learning, self-reliance, as well as the ability to experiment and change. Rosenbloom incorporates insights from psychologists and sociologists who have studied solitude and happiness, and explores such topics as dining alone, learning to savor, discovering interests and passions, and finding or creating silent spaces. Her engaging and elegant prose makes Alone Time as warmly intimate an account as the details of a trip shared by a beloved friend--and will have its many readers eager to set off on their own solo adventures.

STEPHANIE ROSENBLOOM is the sole staff columnist for the Sunday Travel section of The New York Times, where she has been a reporter for various desks (including Styles, Business, and Metro) for more than a decade. She has appeared on CNN's American Morning, NBC's The Today Show, and NPR's The Takeaway.