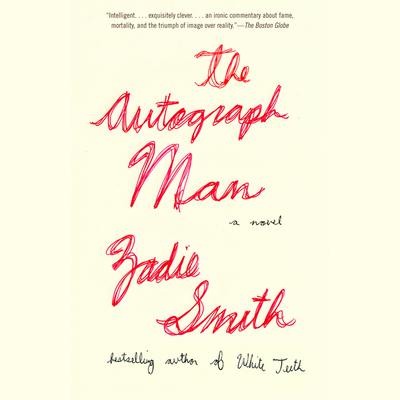 We live in a world of signs.
But not everybody has to trade in them....

Alex-Li Tandem sells autographs. A small blip in a huge worldwide network of desire, his business is to hunt for names on paper, collect them, sell them, and occasionally fake them—all to give the people what they want: a little piece of Fame. But what does Alex want? Only the return of his father, the reinstatement of some kind of all-powerful, benevolent God-type figure, the end of religion, something for his headache, three different girls, infinite grace, and the rare autograph of forties movie actress Kitty Alexander. With fries.

The Autograph Man is a deeply funny existential tour around the hollow things of modernity: celebrity, cinema, and the ugly triumph of symbol over experience. Through London and then New York, searching for the only autograph that has ever mattered to him, Alex follows the paper trail while resisting the mystical lure of Kabbalah and Zen, and avoiding all collectors, con men, and interfering rabbis who would put themselves in his path. Pushing against the tide of his generation, Alex-Li is on his way to finding enlightenment, otherwise known as some part of himself that cannot be signed, celebrated, or sold.

ZADIE SMITH is the author of the novels White Teeth, The Autograph Man, On Beauty, NW, and Swing Time, as well as a collection of essays, Changing My Mind.