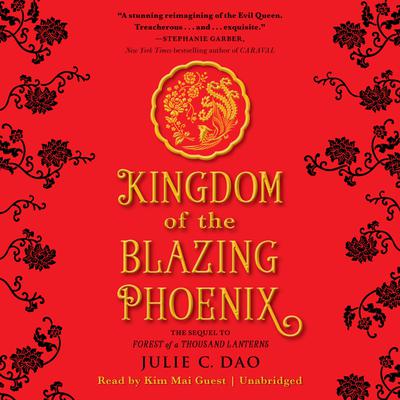 Kingdom of the Blazing Phoenix (Rise of the Empress) (Digital Audiobook)

This fairy tale retelling lives in a mystical world inspired by the Far East, where the Dragon Lord and the Serpent God battle for control of the earthly realm; it is here that the flawed heroine of Forest of a Thousand Lanternsfinally meets her match. An epic fantasy finale to that breathtaking and dazzling story.

Princess Jade has grown up in exile, hidden away in a monastery while her stepmother, the ruthless Xifeng, rules as Empress of Feng Lu. But the empire is in distress and its people are sinking into poverty and despair. Even though Jade doesn't want the crown, she knows she is the only one who can dethrone the Empress and set the world right. Ready to reclaim her place as rightful heir, Jade embarks on a quest to raise the Dragon Lords and defeat Xifeng and the Serpent God once and for all. But will the same darkness that took Xifeng take Jade, too? Or will she find the strength within to save herself, her friends, and her empire?

Fans of Stealing Snow, Red Queen, and The Wrath and the Dawn will hungrily devour this page-turning read.

*Includes a Bonus PDF of the cast of characters

Praise for Kingdom of the Blazing Phoenix:

"A grand adventure for fans of fairy tales, fables, and legends coupled with the vibrant history of Chinese dynasties." --Kirkus Reviews

Praise for Forest of a Thousand Lanterns:

"A richly developed fantasy world coupled with an ambitious antiheroine of complex agency, this story shines and surprises at every turn. Julie C. Dao is a talent to watch."--Marie Lu, #1 New York Times bestselling author of The Young Elites

* "This novel will trap readers in a lush, dangerously dark, and often beautiful world from which they will want no escape."--Booklist, starred review

* "A fascinating examination of destiny, responsibility, and how choices shape a person."--Publishers Weekly, starred review

"Rich in detail and full of gore and blood, this dark novel will satisfy Game of Thrones fans."--School Library Journal

"Dark, lush, and intense, Forest of a Thousand Lanterns draws you into a world filled with mystery and intrigue. . . . A stunning debut!"--Cindy Pon, author of Wantand Serpentine

"An enchanting debut with a powerful and ambitious lead."--Zoraida Córdova, award-winning author of Labyrinth Lost

"Equal parts lush and devastating, this is a tale that will grab you by the throat."--Roshani Chokshi, New York Times bestselling author of The Star-Touched Queen

"Julie C. Dao's Forest of a Thousand Lanterns is delicious, addicting, and breathtaking, a book you fall into from the first page to the last. Her rich world is thick with wonder, intrigue, and delightful darkness."--Dhonielle Clayton, author of The Belles and coauthor of the Tiny Pretty Things series

JULIE DAO (www.juledao.com) is a proud Vietnamese-American who was born in upstate New York, and then was raised amidst the fields and sloping mountains of New England. She went to college to become a doctor, but (go figure) came out ready to pursue her passion of creative writing. She is greatly influenced by the work of Jane Austen, J.K. Rowling, Maggie Stiefvater, Jhumpa Lahiri, Neil Gaiman, and Laini Taylor. Julie lives in New England. Follow her on Twitter @jules_writes.