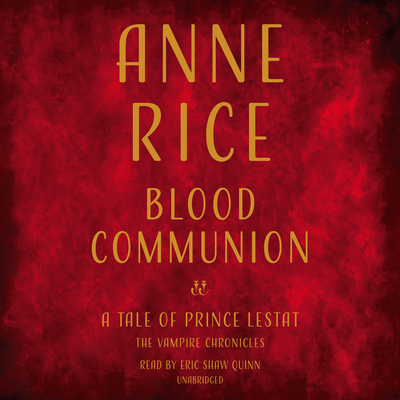 In this spellbinding novel, Lestat, rebel outlaw, addresses the tribe of vampires, telling us the mesmerizing story of how he became prince of the vampire world, and of the formation of the Blood Communion, and how his vision for the Children of the Universe to thrive as one, came to be.

Lestat takes us from his ancestral castle in the snow-covered mountains of France to the verdant wilds of lush Louisiana, with its lingering fragrances of magnolias and night jasmine; from the far reaches of the Pacific’s untouched islands to the 18th-century city of St. Petersburg and the court of the Empress Catherine. He speaks of his fierce battle of wits and words with the mysterious Rhoshamandes, proud Child of the Millennia, reviled outcast for his senseless slaughter of the legendary ancient vampire Maharet, avowed enemy of Queen Akasha, who refuses to live in harmony at court and who threatens all Lestat has dreamt of . . .

Praise for Anne Rice and The Vampire Chronicles:

“Anne Rice will live on through the ages of literature. . . . To read her is to become giddy as if spinning through the mind of time, to become lightheaded as if our blood is slowly being drained away.” —San Francisco Chronicle

“Fans old and new will find this book an effusive celebration of a saga now more than forty years in the making.” —Publishers Weekly

“Lestat is . . . an engaging character who manages to live up to his own hype.” —The Boston Globe

ANNE RICE is the author of thirty-six books, including the fifteen books in the Vampire Chronicles series. She lives in La Quinta, California.
Loading...
or
Not Currently Available for Direct Purchase