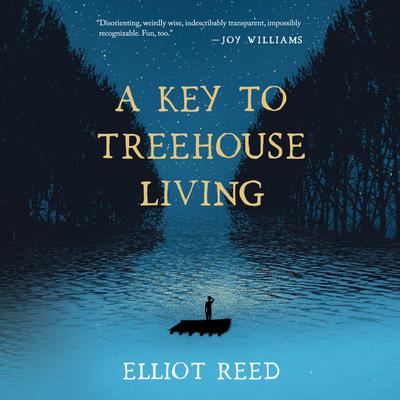 “In A Key to Treehouse Living, Elliot Reed gives us a new T.S. Spivet, a new Huck Finn, to take to our hearts. Lost boy William Tyce orders his fraying world in glossary entries, each representing a piece of his journey from living in a mansion to living in treehouses and under bridges. He is an orphan seeking answers: Who were his parents? How is it best to live while a ward of the state? A poignant, hilarious, gorgeously written take on growing up, and growing to embrace the world and the wild blue yonder.”
— Chrysler Szarlan, Odyssey Bookshop, South Hadley, MA
View the List

For fans of Mark Haddon, Tony Earley, and Jonathan Safran Foer, an epic tale of boyhood from an unforgettable new voice.

A Key to Treehouse Living is the adventure of William Tyce, a boy without parents, who grows up near a river in the rural Midwest. In a glossary-style list, he imparts his particular wisdom on subjects ranging from ASPHALT PATHS, BETTA FISH, and MULLET to MORTAL BETRAYAL, NIHILISM, and REVELATION. His improbable quest—to create a reference volume specific to his existence—takes him on a journey down the river by raft (see MYSTICAL VISION, see NAVIGATING BIG RIVERS BY NIGHT). He seeks to discover how his mother died (see ABSENCE) and find reasons for his father’s disappearance (see UNCERTAINTY, see VANITY). But as he goes about defining his changing world, all kinds of extraordinary and wonderful things happen to him.

Unlocking an earnest, clear-eyed way of thinking that might change your own, A Key to Treehouse Living is a story about keeping your own record straight and living life by a different code.

ELLIOT REED is a writer from the midwestern region of the United States. He received his MFA at Florida State, and is currently teaching at Washington State in Spokane, Washington.