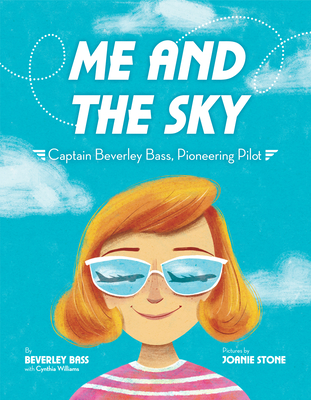 Me and the Sky

The groundbreaking female pilot featured in the hit Broadway musical Come from Away tells her story in this high-flying and inspiring picture-book autobiography!

When Beverley Bass was a young girl in the late 1950s, she told her parents she wanted to fly planes--and they told her that girls couldn't be pilots. Still, they encouraged her, and brought her to a nearby airport to watch the planes take off and land.

After decades of refusing to take no for an answer, in 1986 Beverley became the first female pilot promoted to captain by American Airlines and led the first all-female crewed flight shortly thereafter. Her revolutionary career became even more newsworthy when she was forced to land in the remote town of Gander, Newfoundland, on September 11, 2001, due to US airspace closures. After several days there, she flew her crew and passengers safely home.

Beverley's incredible life is now immortalized in the hit Broadway musical Come from Away. Here, discover how she went from an ambitious young girl gazing up at the sky to a groundbreaking pilot smiling down from the cockpit.

"Inspiring and up, up, and away all the way."--Kirkus
"An inspiring biography about one woman's determination to forge a new path."--Booklist

Beverley Bass is a retired pilot who spent decades flying for American Airlines and was their first female captain. She is the founder of a nonprofit that empowers female aviators around the world, and continues to work with them. She also actively supports the musical Come from Away. She tweets from @jetsflygirl.

Joanie Stone was born and raised in Virginia, where she still lives today with her husband and young daughter. She uses her background in traditional hand-drawn animation to bring life and movement to her characters and fills her images with textures reminiscent of children's books from the past. She is also the illustrator of the Sing Your Colors! series. Learn more about Joanie online at JoanieStone.com or on Instagram at @JoanieStoneArt.
Loading...
or
Not Currently Available for Direct Purchase