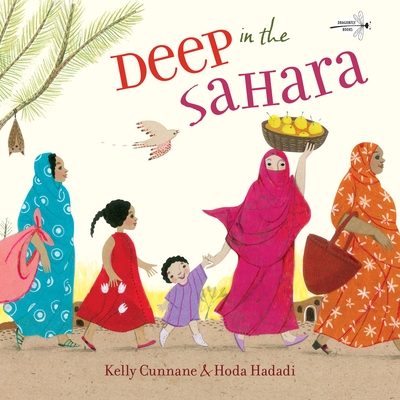 Deep in the Sahara

"Poetic language, attractive illustrations and a positive message about Islam, without any didacticism: a wonderful combination," declares Kirkus Reviews in a starred review.

Lalla lives in the Muslim country of Mauritania, and more than anything, she wants to wear a malafa, the colorful cloth Mauritanian women, like her mama and big sister, wear to cover their heads and clothes in public. But it is not until Lalla realizes that a malafa is not just worn to show a woman's beauty and mystery or to honor tradition—a malafa for faith—that Lalla's mother agrees to slip a long cloth as blue as the ink in the Koran over Lalla's head, under her arm, and round and round her body. Then together, they pray.

An author's note and glossary are included in the back of the book.

Praise For Deep in the Sahara…

Starred Review, Publishers Weekly, September 9, 2013:
"The warm, affirming portrait of Islam makes this a valuable resource for both Muslim audiences and a broader readership interested in potentially unfamiliar customs and observances of faith."

Starred Review, Booklist, November 15, 2013:
"The women, all individualized, exude true warmth, and readers will feel a quiet satisfaction when Lalla joins them. A special offering."

KELLY CUNNANE received the Ezra Jack Keats New Writer Award for her picture book For You Are a Kenyan Child, which the New York Times described as "entrancing . . . [an] inviting introduction to a different culture." Her book Chirchir Is Singing was an ALA-ALSC Notable Children's Book. Kelly has lived and taught in Kenya and Mauritania and currently lives in Beals, Maine.

HODA HADADI is a children's books illustrator living and working in Tehran, Iran. She has illustrated more than forty books for children and has won numerous international prizes, including the New Horizons Bologna Ragazzi Award and the Grand Prix of Belgrade. This is her first U.S. picture book.
Loading...
or support indie stores by buying on
(This book is on backorder)