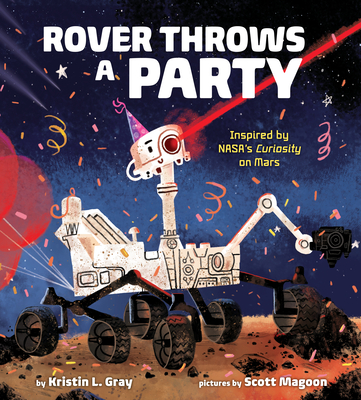 Inspired by NASA's Curiosity on Mars

Inspired by NASA's Curiosity rover, this is the story of a lonely Mars rover who plans the best birthday party in the solar system.

It's Rover's anniversary on Mars! Time to celebrate by throwing the best party this planet has ever seen. Rover hands out invitations all over town, but it seems like he's the only one around. Will anyone come to the party, or will Rover be all alone on his big day?

In 2013, NASA programmed their Curiosity rover to hum "Happy Birthday to You" in honor of its first year on Mars. Inspired by this anecdote, this is the tale of a lonely rover and his party, accompanied by fascinating Mars rover facts that help explain the real science behind the story. This fun birthday tale provides an accessible, kid-friendly look at one of NASA's coolest programs.

Kristin L. Gray drinks coffee (cream, no sugar) and writes books (funny, not sad) from her home in northwest Arkansas. She loves to read, walk her dogs, and eat cake for breakfast. She will also travel any chance she gets. Her debut novel, Vilonia Beebe Takes Charge, published with S&S in 2017. Visit her at KristinLGray.com and follow her on Twitter at @kristinlgray.

Scott Magoon has illustrated several acclaimed picture books, including the New York Times bestselling RESCUE & JESSICA: A LIFE-CHANGING FRIENDSHIP by Jessica Kensky and Patrick Downes, MISUNDERSTOOD SHARK by Ame Dyckman, SPOON by Amy Krouse Rosenthal, and THE NUTS series by Eric Litwin. He is also the author-illustrator of BREATHE and THE BOY WHO CRIED BIGFOOT! He lives in Massachusetts. Visit him online at www.scottmagoon.com.
Loading...
or support indie stores by buying on