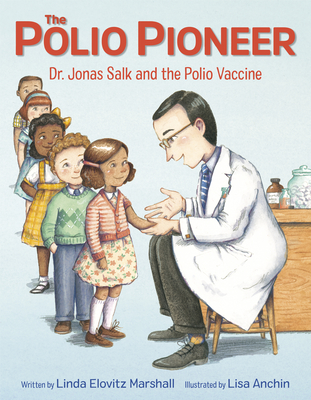 A SYDNEY TAYLOR NOTABLE BOOK • Learn about the importance of vaccines and the scientific process through the fascinating life of world-renowned scientist Jonas Salk, whose pioneering discoveries changed the world forever.

Praise For The Polio Pioneer: Dr. Jonas Salk and the Polio Vaccine…

“Gently cheerful. . . . The message that a solution was found to a disease outbreak before is a reassuring one, and kids may wish to learn more about Dr. Salk.” —The Bulletin

“A recommended purchase for most libraries. This title explains how vaccines work, provides historical context, and inspires the hope of a victory over the current pandemic.” —School Library Journal

Lisa Anchin has been drawing since she could hold a pencil and making up stories since she could speak. She received her BA from Smith College and took a long circuitous route to an MFA at the School of Visual Arts in New York. She is often holed up in her studio stringing words together and compulsively doodling, but she also loves meeting other kidlit folks and volunteers as the Illustration Coordinator for SCBWI's Metro NY Chapter. She is the illustrator of A PENGUIN NAMED PATIENCE by Suzanne Lewis (Sleeping Bear Press 2015) and I WILL LOVE YOU by Alyssa Satin Capucilli (Scholastic 2017). Her first author/illustrated title, THE LITTLE GREEN GIRL, was published in 2019. Lisa lives in Brooklyn with her husband, daughter, and their two studio cats.
Loading...
or
Not Currently Available for Direct Purchase