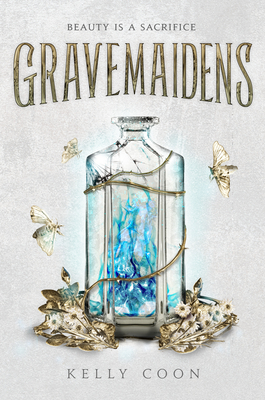 The start of a fierce fantasy duology about three maidens who are chosen for their land's greatest honor...and one girl determined to save her sister from the grave.

In the walled city-state of Alu, Kammani wants nothing more than to become the accomplished healer her father used to be before her family was cast out of their privileged life in shame.

When Alu's ruler falls deathly ill, Kammani’s beautiful little sister, Nanaea, is chosen as one of three sacred maidens to join him in the afterlife. It’s an honor. A tradition. And Nanaea believes it is her chance to live an even grander life than the one that was stolen from her.

But Kammani sees the selection for what it really is—a death sentence.

Desperate to save her sister, Kammani schemes her way into the palace to heal the ruler. There she discovers more danger lurking in the sand-stone corridors than she could have ever imagined and that her own life—and heart—are at stake. But Kammani will stop at nothing to dig up the palace’s buried secrets even if it means sacrificing everything…including herself.


"A dark and utterly enthralling journey to an ancient land, Gravemaidens grabs you by your beating heart and refuses to let go until the bitter, breathtaking end."—Sarah Glenn Marsh, author of the Reign of the Fallen series

YA author Kelly Coon is an editor for Blue Ocean Brain, a member of the Washington Post Talent Network, a former high school English teacher, ACT test prep book author, and a wicked karaoke singer in training. She adores giving female characters the chance to flex their muscles and use their brains, and wishes every story got the happy ending she's living near Tampa with her three sons, dashingly handsome husband, and a rescue pup who will steal your sandwich. Gravemaidens is her debut novel.

"A dark and utterly enthralling journey to an ancient land, Gravemaidens grabs you by your beating heart and refuses to let go until the bitter, breathtaking end."—Sarah Glenn Marsh, author of the Reign of the Fallen series


"The atmospheric writing and lively dialogue will draw you into the story while the plot’s exciting twists and turns will keep you turning pages until the very end." —Gita Trelease, author of Enchantee

“Twists and clues steadily advance the first-person narrative… accompanied by plenty of risk and excitement.” —Booklist

"Coon builds a rich and detailed world complete with a history and rules that readers will enjoy uncovering slowly."—Kirkus Reviews

“The concept and mystery are compelling, the pace brisk, and Coon succeeds in showing how grief molds people in different ways.” —Publishers Weekly
or
Buy Here
Copyright © 2020 American Booksellers Association