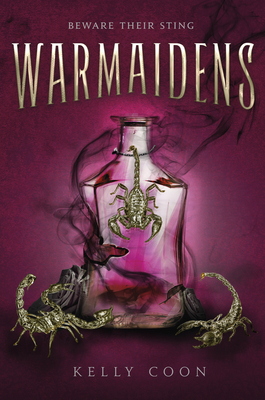 “A dark, delectable, and utterly unique series that readers will want to drown in.” —Laura Sebastian, New York Times bestselling author of the Ash Princess series

Warmaidens is the action-packed conclusion to the heartwrenching Gravemaidens fantasy duology. Kammani and the maidens are now going to war against the ruler who tried to entomb them.

Just a few moons after escaping the tomb in Alu, Kammani and the other runaway maidens have found refuge in the city-state of Manzazu. There, Kammani has become a respected healer, especially among the warriors she’s brought back from the brink of death. Now that the nightmares of Alu are fading, she can finally decide whether or not to take Dagan’s hand in marriage.

But when an assassin murders a healer he believes is Kammani and attempts to kill the displaced queen of Alu, the maidens realize they’ve been found.

Hungry for revenge, Manzazu’s queen wants to strike back at Alu with her fiercest weapons—her scorpion warrior maidens—but Kammani knows that war harms more than it heals. To save the innocents and any chance of a future with Dagan, Kammani must take down Alu’s ruler before their lives burn up in the flames of war.

Kelly Coon is the author of the enthralling fantasy duology Gravemaidens and Warmaidens. She is an editor for Blue Ocean Brain, a member of the Washington Post Talent Network, a former high school English teacher, ACT test prep book author, and a wicked karaoke singer in training. She adores giving female characters the chance to flex their muscles and use their brains, and wishes every story got the happy ending she's living near Tampa with her three sons, dashingly handsome husband, and a rescue pup who will steal your sandwich. Find Kelly Coon on Instagram, TikTok, and Twitter.
Loading...
or support indie stores by buying on