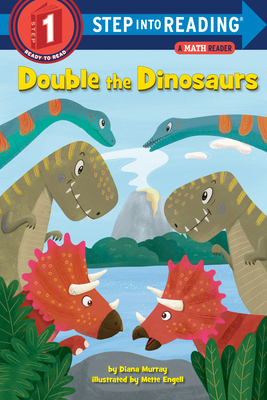 A Math Reader (Step into Reading)

2, 4, 6, 8, math with dinos is so GREAT! This Step 1 early reader will introduce the fundamentals of addition and the concept of "doubling."

First there's one dinosaur, then two, then four... keep up the doubling and there will sixty-four dinosaurs before the story's through. The dinosaurs like to stomp and play, but they seem to keep multiplying. This math reader is a great introduction to the concept of addition and doubling.

DIANA MURRAY is the author of Pizza Pig (Step 2), several picture books for kids, and her poems have appeared in children's magazines such as Highlights, High Five, Spider, and Ladybug. She grew up in New York City and still lives nearby with her husband, two very messy children, and a goldfish named Pickle.

METTE ENGELL is a self-taught children's illustrator. She grew up in the northern part of Zealand, the largest island in Denmark. She studied biology at the university of Copenhagen, but she has always loved coming up with stories and characters. After her first child was born, she picked up her pencil and hasn't put it down since. Today she lives by the ocean with her husband and their 3 kids, 2 cats, and a lionhead bunny in a blue house filled with art supplies, picture books, and Legos.
Loading...
or support indie stores by buying on