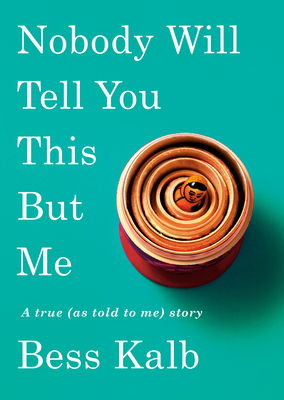 Nobody Will Tell You This But Me

A true (as told to me) story

ONE OF THE BEST BOOKS OF THE YEAR:
VOGUE • FORBES • BOOKPAGE • NEW YORK POST • WIRED

“I have not been as profoundly moved by a book in years.” —Jodi Picoult

Even after she left home for Hollywood, Emmy-nominated TV writer Bess Kalb saved every voicemail her grandmother Bobby Bell ever left her. Bobby was a force—irrepressible, glamorous, unapologetically opinionated. Bobby doted on Bess; Bess adored Bobby. Then, at ninety, Bobby died. But in this debut memoir, Bobby is speaking to Bess once more, in a voice as passionate as it ever was in life.

Recounting both family lore and family secrets, Bobby brings us four generations of indomitable women and the men who loved them. There’s Bobby’s mother, who traveled solo from Belarus to America in the 1880s to escape the pogroms, and Bess’s mother, a 1970s rebel who always fought against convention. But it was Bobby and Bess who always had the most powerful bond: Bobby her granddaughter’s fiercest supporter, giving Bess unequivocal love, even if sometimes of the toughest kind. Nobody Will Tell You This But Me marks the creation of a totally new, virtuosic form of memoir: a reconstruction of a beloved grandmother’s words and wisdom to tell her family’s story with equal parts poignancy and hilarity.

Praise For Nobody Will Tell You This But Me: A true (as told to me) story…

"A funny, touching and timely reminder of the solace to be found in kindred spirits." —People

"A poignant and funny look at four generations of women." —Stephanie Merry, The Washington Post

"Reliably funny...poignant on the aftermath of loss. Written from the sometimes acerbic, sometimes sweet and always laser-sharp perspective of [Kalb's grandmother,] Bobby Bell ... in between are loving recollections of their relationship, including snippets of conversations and voicemails and a steady supply of life advice."—Chris Barton, Los Angeles Times

“I have never read anything that feels truer to my experience of having a Jewish grandmother than Nobody Will Tell You This But Me. Bess Kalb’s memoir is told from the perspective of her grandmother, Bobby, and Bess captures her voice beautifully. Funny, heartwarming, deeply moving.”
—Emily Burack, Hey Alma

"A love story that resonates across generations . . . Grandma Bobby's personality radiates from the page. Like a set of nesting dolls, those stories begin as Grandma Bobby recalls the life story of her own mother, [whose] profound vulnerability—and genius at survival—marks the matrilineal line. With determination, creative thinking and practical planning, Bobby helps lift herself and her family out of their gritty working-class roots and into a comfortable lifestyle she eagerly shares with her granddaughter, Bess. The two were instant soulmates . . . The way Kalb honors her grandmother is a testament to their connection. Original, moving, and funny." —Alison Buckholtz, The Florida Times-Union

“Funny, tender and incredibly moving . . . Both a family history and a celebration of the bond between grandmother and granddaughter—a book that gives you a solid cathartic weep and a renewed sense of joy in family ties.” —Mackenzie Dawson, New York Post

“I have not been as profoundly moved by a book in years. If you have a mother or grandmother, or ARE a mother or a grandmother, this is required reading. Bess Kalb's fictional-factual tribute to the relationship she had with her grandmother—the way her history was passed to her by blood, along with bright memories and Jewish guilt and fierce, fierce love—could have been my own story. When I stop crying, I'm calling my mother immediately and making her read it.” —Jodi Picoult

“Tender, funny, fresh, and unconventional, Nobody Will Tell You This But Me manages to make something new and wonderful out of a family memoir. Kalb has a light, lovely touch and a big heart, which combine to make this book irresistible.” —Susan Orlean

“I am in love with the all-consuming, hilarious, primal relationship between Bess Kalb and her late grandmother, Bobby Bell. This memoir made my heart swell, my eyes alight in amazement and joy. Bobby regales her granddaughter with her infinite wisdom, which is almost always over the top and a little bit critical but delivered with love's exuberance.” —Al Woodworth, Amazon Book Review

“Lively and fascinating, funny yet poignant. There are laughs galore throughout the book . . . [yet] Kalb processes her own grief as she writes, sharing how she reacted in the days following her grandmother’s death. Kalb pulls off [a] daring approach brilliantly—in a bold stroke of literary bravura, she has turned the formula for writing memoirs inside out, bringing her grandmother’s distinctive voice back to life and sharing it with a legion of lucky readers . . . Enthralling.” —Alice Cary, BookPage [starred review]

“Nobody Will Tell You This But Me is precisely that—a book no one other than Bess Kalb would think to create. It’s an invented form that has bursts of comic lines as good as in any movie, and pathos as deep as in any novel. I love this book.” —Mike Birbiglia, author of Sleepwalk with Me and The New One

“We are the stories we leave behind, and so we must depend on the storytellers who carry forward our memories. 'Grandma Bobby' gave Bess Kalb gifts of love and language (and lunches at the Plaza!), and in this deeply moving and powerful book, Bess repays her in full with a magnificent act of conjuring. Bobby, and the line of stubborn women of which she was the keystone, lives on in this act of love. This book made me miss my own grandmother, who didn’t have Bobby’s style, but was just as fierce. I wish I had listened to her as carefully as Bess did to Bobby.” —Peter Sagal, host of NPR's Wait, Wait... Don't Tell Me!

"Thank you Bess Kalb for giving us Bobby. She is hilarious and honest and heartbreaking and completely alive in these pages—and I love her." —Gary Janetti, author of Do You Mind If I Cancel?

“An endearing, bittersweet, entertainingly fresh take on the family memoir. Kalb employs an unconventional yet highly effective and charming narrative, channeling the voice and personality of her grandmother, Bobby Bell, who snares readers' attention right from the first, [as] Kalb sharply reimagines her inner thoughts and remembers her fiercely nurturing criticism. The narrative skillfully captures Bobby's wit, worldly advice, well-intentioned meddling, and enduring love for her granddaughter. Readers familiar with the Bobby in their own families will appreciate the stoic overprotectiveness and exasperation that come with being a parent and grandparent. As the book progresses, the story becomes both sad and poignant—the photos and the imagined conversations make for sometimes heartbreaking reading, honoring a beloved grandmother’s legacy.” —Kirkus [starred review]

Bess Kalb is an Emmy-nominated comedy writer and the bestselling author of Nobody Will Tell You This But Me, a New York Times Editor’s Choice. She wrote for eight years on Jimmy Kimmel Live! and has written for the Emmy Awards, the Academy Awards, and the 2020 Democratic National Convention. She is the head writer and executive producer of the WGA Award-nominated Yearly Departed, an Amazon Comedy Special, and is currently adapting Nobody Will Tell You This But Me into a feature film with Sight Unseen Pictures.
Loading...
or
Not Currently Available for Direct Purchase