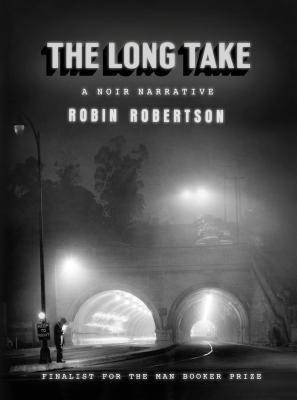 **Finalist for the 2018 Man Booker Prize**
**Winner of the Walter Scott Prize for Historical Fiction, the Goldsmiths Prize for Innovative Fiction, and the Roehampton Poetry Prize**

From the award-winning British author—a poet's noir narrative that tells the story of a D-Day veteran in postwar America: a good man, brutalized by war, haunted by violence and apparently doomed to return to it, yet resolved to find kindness again, in the world and in himself.

Walker is a D-Day veteran with post-traumatic stress disorder; he can't return home to rural Nova Scotia, and looks instead to the city for freedom, anonymity and repair. As he finds his way from New York to Los Angeles and San Francisco, we witness a crucial period of fracture in American history, one that also allowed film noir to flourish. The Dream had gone sour but—as those dark, classic movies made clear—the country needed outsiders to study and to dramatize its new anxieties. Both an outsider and, gradually, an insider, Walker finds work as a journalist, and tries to piece his life together as America is beginning to come apart: riven by social and racial divisions, spiraling corruption, and the collapse of the inner cities. Robin Robertson's fluid verse pans with filmic immediacy across the postwar urban scene—and into the heart of an unforgettable character—in this highly original work of art.

Praise For The Long Take: A noir narrative…

“A propulsive verbal tour de force . . . A hymn to destruction that exposes our country’s betrayal of the American Dream in the years following World War II. [Robertson] places Walker’s world on a continuum of postwar abusive power that still resonates today, while also reminding the reader of older instances of displacement such as the Trail of Tears and Scotland’s Sutherland clearances. The Long Take conveys dignity upon its less than noble characters because they’ve been dispossessed by outside forces. . . . When was the last time you said of a book of poetry, ‘I couldn’t put it down?’ Well, now’s your chance.” —Sibbie O’Sullivan, The Washington Post

“A remarkable work . . . I can’t think of anything quite like it  . . . Modern, complex, political . . . [Robertson’s] language is functional and often exquisite . . . Though rooted in a specific time and place, The Long Take’s larger theme is the capacity of greed and politics to turn hope into despair . . . A poem that’s long been waiting to be written.” —Woody Haut, Los Angeles Review of Books

"As far as books go it’s A-1. I recommend it." —Nico Walker, author of Cherry

“Robertson has cast a national, cultural, psychological and class outsider of vibrant and seedy post-war America into a palpable anti-hero eerily resonant with our contemporary world. With syncopated rhythms, staccato dialogue and jump-scenes, the book weaves dizzying, jazz-like meditations on PTSD, masculinity, betrayal and salvation by embodying, in sound, scent and sixth-sense, one of America’s most hopeful and devastating decades. The result is a ravishing achievement.” —Ocean Vuong

“[A] lyrical masterpiece . . . Robertson has written a book that manages to be epic and elegiac, and suffused with savagery and beauty.” —Malcolm Forbes, Minneapolis Star Tribune

“The wondrous story of a Canadian veteran of the second world war who washes up in New York and then Los Angeles—told mostly in verse. Walker, the protagonist, is haunted by his experiences in combat and by memories of his youth, and pained by the neglect of the homeless in California. Probably the best novel of the year.” —The Economist (“Books of the Year”)

“Bold, brilliant, filled with wonderful imagery and meticulously researched, this is as poignant and visual as classic film noir.” —Ian Rankin

“Superlative.” —Justine Jordan, The Guardian “Books of the Year”

"This book will shift something in your soul. By the time you have finished reading it, you won’t quite be the same." —Elif Shafak, Goldsmiths Prize judge

“A beautiful, vigorous and achingly melancholy hymn to the common man that is as unexpected as it is daring. Here we have a poet, at the peak of his symphonic powers, taking a great risk, and succeeding gloriously . . . The Long Take is a masterly work of art, exciting, colourful, fast-paced – the old-time movie reviewer’s vocabulary is apt to the case – and almost unbearably moving.” —John Banville, The Guardian

“Hypnotic and wrenching . . . Robertson transforms the long take into an epic taking of life, liberty, reason, and hope in this saga of a good man broken by war and a city savaged by greed, an arresting and gorgeously lyrical and disquieting tale of brutal authenticity, hard-won compassion, and stygian splendor.” —Donna Seaman, Booklist (starred review)

“Immaculately researched . . . Walker is a superbly rounded character, and his tale one worth telling . . . Moving and engrossing.” —Rory Waterman, The Times Literary Supplement

“Robertson’s deliberate, atmospheric verse narrative soars with an emphatic grandeur more usually found in symphonic music . . . As a work of art, this dreamlike exploration is a triumph; as a timely allegory, it is disturbingly profound . . . Robertson’s The Long Take is one of the first major achievements of 21st-century English-language literature.” —Eileen Battersby, Financial Times

“A blisteringly beautiful vision of America rotting in the aftermath of the Second World War . . . Robertson's book is stylish, daring, high concept and amazing.” —Evening Standard

“Robertson’s The Long Take shows it is perfectly possible to write poetry which is both accessible and subtle, which has a genuine moral and social conscience without sacrificing the polished nature of the language to soundbite and cliché.” —Stuart Kelly, Scotland on Sunday

“[Robertson’s] writing is a charged marriage of precision and wildness, of meticulous architecture and unbridled energy . . . writing of extraordinary sensuality . . . In this cinepoetic narrative, lyric is the long take, while the lift and fall of the feet of the wounded tell stories of hope and loss.” —Felicity Plunkett, The Australian

"Robertson's The Long Take shows it is perfectly possible to write poetry which is both accessible and subtle, which has a genuine moral and social conscience without sacrificing the polished nature of the language to soundbite and cliché . . . A major achievement." —Stuart Kelly, The Scotsman

“A sustained tribute to the cinematic art of light and dark.” —Jeremy Noel-Tod, Sunday Times

“[A] flashpoint in U.S. history, an almost perfect mirror image of the nation today . . . The Long Take remarkably captures linguistic styles of 1940s American writing—Saroyan and Steinbeck. As it progresses into the mid-50s we’re hearing Ginsberg and Baldwin . . . You will be washed in all these when you read this poem.” —Todd McEwen, Sunday Herald

ROBIN ROBERTSON was brought up on the northeast coast of Scotland and now lives in London. A Fellow of the Royal Society of Literature, he has published five collections of poetry and has received a number of honors, including the Petrarca-Preis, the E. M. Forster Award from the American Academy of Arts and Letters, and all three Forward Prizes. His selected poems, Sailing the Forest, was published in 2014. In the UK, The Long Take has won the 2018 Roehampton Poetry Prize and the Goldsmiths Prize for Fiction, and was shortlisted for the Man Booker Prize.
www.robinrobertson.co.uk
Loading...
or
Not Currently Available for Direct Purchase