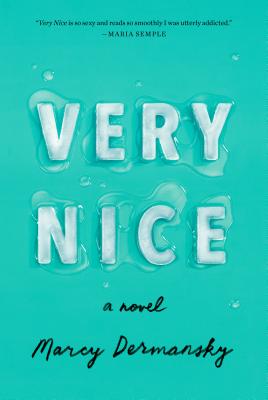 "A story of sex and intrigue set amid rich people in a beautiful house with a picturesque swimming pool . . . Very funny." —Rumaan Alam, The Washington Post

A brilliantly funny novel of bad behavior in the post-Obama era, featuring a wealthy Connecticut divorcée, her college-age daughter, and the famous novelist who is seduced by them both.

Rachel Klein never meant to kiss her creative writing professor, but with his long eyelashes, his silky hair, and the sad, beautiful life he laid bare on Twitter, she does, and the kiss is very nice. Zahid Azzam never planned to become a houseguest in his student's sprawling Connecticut home, but with the sparkling swimming pool, the endless supply of Whole Foods strawberries, and Rachel's beautiful mother, he does, and the home is very nice. Becca Klein never thought she'd have a love affair so soon after her divorce, but when her daughter's professor walks into her home, bringing with him an apricot standard poodle named Princess, she does, and the affair is . . . a very bad idea.

Zigzagging between the rarefied circles of Manhattan investment banking, the achingly self-serious MFA programs of the Midwest, and the private bedrooms of Connecticut, Very Nice is an audacious, addictive, and wickedly smart take on the way we live now.

Praise For Very Nice: A novel…

“A story of sex and intrigue set amid rich people in a beautiful house with a picturesque swimming pool… The brisk pacing and economical style are seductive and keep the reader’s attention… Ruminate[s] on identity, art, violence, and our current politics… She’s asking big questions but at the same time giving us the kind of book we’re told we want during the summer… This is a more serious book than it might seem at first glance. It’s like she’s served us a cupcake that turns out to be nutritious. I won’t spoil the book’s conclusion, not because I dislike spoilers but because I’m in awe of it… Okay, one spoiler: The last word of the book is ‘laugh.’ I bet you will.”
–Rumaan Alam, The Washington Post

“This is a vicious little novel, smart, efficient, mean, full of terrible people behaving terribly, incisive observations about a certain class of people pretending they had no hand in the state of the world. Writers don't come off too well, either. Absolutely delightful.”
–Roxane Gay, author of Bad Feminist and Hunger

“Subtly riotous… Dermansky has cultivated a style marked by humor so dry it threatens to ignite on the page. The assured deadpan prose belies the characters’ chaotic inner lives. It’s a precarious balance, but Dermansky uses deft plotting and absurdist ironies to both shock readers and probe psychological nuances… Very Nice is a wickedly fun and emotionally potent farce about the often-frustrating fluidity of our relationships to one another and ourselves. Along the way, Dermansky skewers Wall Street and the Iowa Writers Workshop—students “tried so hard” and “wanted so much praise”—but her real battleground is the beating heart.”
–Michelle Hart, O Magazine

“A tart lemonade of a summer read… A decidedly modern update to John Cheever's suburbia… Very Nice zips and twists along episodically, with a tightly spun narrative… Beneath the fun, Very Nice is a scathing portrait of a culture in which self-interest overrides duty and loyalty. Even the dog is unfaithful.”
–Heller McAlpin, NPR

“A juicy tale of bad behavior… The setup is ideally soapy: Rachel seduces Zahid. Zahid falls in love with Becca. And all three find themselves under the same roof, of Becca’s ritzy Connecticut home, complete with a glistening swimming pool and perfectly carbonated seltzer… In short, nasty chapters, Dermansky (The Red Car) stacks this house of cards with cool, bitingly clever prose. And when it falls, Very Nice gets pretty mean — but gloriously so. A-”
–Entertainment Weekly

"This sharply hilarious read is a million times better than very nice —it’s totally fabulous... the most carefully prepared plans may go wrong but here they do so in spades, making this the most addictive rollercoaster ride. It’s the best thing I’ve read in ages."
–Daily Mail

"This is the buzzy, breezy summer read you've been craving all summer. In it, a creative writing professor gets swept up by the whims and wiles of two equally seductive women: his student — and her mother."
–Bustle

"Every few years Marcy Dermansky drops a new book and it’s usually one of the sleeper hits of the year. Her latest novel explores the lives of upscale East Coasters and all their wonderfully addictive-to-read-about problems."
–Inside Hook

"Imagine you hookup with your college professor. Then imagine you go home to spend the summer with your recently divorced, super-hot, super-rich mom. And then imagine that your professor randomly shows up (clearly crushing on your mom, not you) for the most sexually tense summer of your life. This is Very Nice."
–Cosmopolitan

"Every character in this comedy of bad manners is on thin ice. Creative-writing professor Zahid realizes that he can push a one-time encounter with his student Rachel into a summerlong stay at Rachel’s cushy Connecticut home. But before you know it, Rachel’s mother, Becca, is heating up the pool house with Zahid — and co-opting his apricot-colored poodle, to boot."
–Washington Post

"You don’t have to be an author to appreciate the novel’s pleasures. This rapid-fire tale, which switches among five narrators, will keep readers entertained... With an impressively light touch, Dermansky pokes considerable fun at the literary world... Very amusing, really."
–Minneapolis Star Tribune

"Marcy Dermansky’s novel illustrates not only the rage and despair that seethes beneath the surface of people’s everyday lives, but also that we are all dependent on one another -- even if at times we would prefer not to acknowledge those connections."
–Bookreporter

“This [is a] juicy, witty ensemble story. Pack it with your smart beach reads.”
–Parnassus Musing

"Very Nice seems like a madcap soap opera perfect for a summer read. Dermansky is too sly to write a vapid novel, and while Very Nice may go down like a gin and tonic on a hot summer day, there’s a subtle wit at work as perspectives shift while narrators vie for different roles in this ensemble drama, touching on ambition, money, and race, with a foxy ending."
–The National Book Review

"This [is a] sexy summer novel, in which writers and other deviants (including multiple poodles) swim and sleep together and get jealous and go about their tragicomic lives. What else is there to do, after all?"
–Lit Hub

"If you are looking for a smart yet wacky summer diversion, a sendup of PC pretensions, a book that will make you both laugh and gasp out loud, dive between the enticing aqua covers of Very Nice."
– Marion Winik, Newsday

"Marcy Dermansky is a light switch, a volume knob, a fire drill. Her novels are bright and attention-grabbing, from the first page to the last, and Very Nice is her best yet. This smart, sexy, funny book is a balm for rattled nerves. Write me a thousand more books, Marcy, and I'll read them all."
—Emma Straub, bestselling author of Modern Lovers and The Vacationers

"Very Nice is so sexy and reads so smooth that I was utterly addicted. Trenchantly observed and darkly funny, it will stick with you long after you finish its final, ferocious sentence."
—Maria Semple, bestselling author of Where’d You Go, Bernadette?

"Fans of situational comedies and rom-coms should pre-order this hilarious novel from Marcy Dermansky… It features a small cast of wickedly funny characters and a plot straight out a Shakespearean romance."
—The Today Show

"A messy, sexy, super fun drama that unravels over the course of one summer… Impossible to put down."
—Buzzfeed

“When Zahid Azzam becomes the houseguest of the mother of one of his creative writing students, all kinds of boundaries are crossed. No one is entirely innocent in this addictive story of money, sex, and bad house manners.”
—Jessica Francis Kane, The Guardian

"Very Nice is deceptively polite, a gracious rebuke to every writer who has sworn it's impossible to write about the times in which we live. Marcy Dermansky found the way in, spotted the connections holding our fragmented world together and made them sing. Her best book to date, which is saying quite a lot."
—Laura Lippman, bestselling author of Sunburn

"Better than very nice, this book is glorious. Fast, funny, and filled with memorably brilliant characters."
—Jane Green, bestselling author of The Friends We Keep

"Dermansky's spare prose compels the reader in such an effortless way that the monumental revelations her characters nonchalantly make have an even greater impact. As a study on human nature, this novel can easily hold its own amongst literary works, but will likely also be well-received by general fiction lovers looking for a more substantial, yet still entertaining, book to read."
–Booklist

“[A] sardonic skewering of self-aggrandizing MFA programs, investment banking, and ‘nice’ wealthy suburbs that tend to have seedy secrets bubbling right underneath their shiny veneers.”
–Thrillist

“Sly, deceptively simple and thoroughly seductive... Bouncing between points of view, Dermansky confines herself to snappy, brisk paragraphs and short sentences, with much of the psychic action between the lines. Her sharp satire spares none of the characters and teeters brilliantly on the edge of comedy and tragedy.”
—Publishers Weekly (Starred Review)

"Five narrators play a game of narrative hot potato with a tale of summer sexcapades… A hell of a lot of stylish fun. Can you top this? is the question posed by each chapter of this upmarket soap opera, and the answer is always yes."
–Kirkus

Marcy Dermansky is the author of the critically acclaimed novels The Red Car, Bad Marie, and Twins. She has received fellowships from the MacDowell Colony and the Edward F. Albee Foundation. She lives with her daughter in Montclair, New Jersey.
Loading...
or
Not Currently Available for Direct Purchase