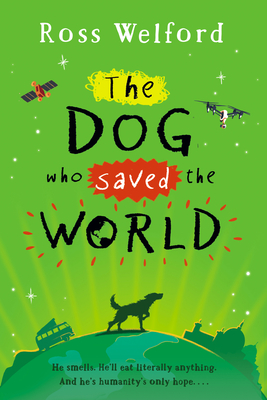 The Dog Who Saved the World

In this fast-paced time travel adventure into the future, a girl and her dog set out to save the world from a deadly plague.

He smells terrible. He'll eat literally anything. And he's humanity's only hope....

When 12-year-old Georgie makes friends with an eccentric retired scientist, she becomes the test-subject for a thrilling new experiment: a virtual reality 3-D version of the future. At first, it's just a game. But when a deadly virus threatens to wipe out every pup on the planet, Georgie and her beloved (and very smelly) dog, Mr. Mash, along with best friend Ramzy, must embark on a desperate quest to save the dogs-- and also all of humanity. And they have to do it without actually leaving the room. This high-concept, astonishing new novel from the author of Time Traveling with a Hamster takes us on an epic adventure, and asks the question: is it really possible to alter the future?

Praise For The Dog Who Saved the World…

Praise for The Dog Who Saved the World:

“The mix of comedy and horror makes for gut-wrenching reading.” —Booklist, starred review

“Welford presents a fast-paced, female-driven STEM adventure in which short chapters that jump back and forth through time keep the plot moving, teasing the story of how everything came to be and keeping readers in suspense.” —Kirkus Reviews

Praise for Time Traveling with a Hamster:

"Nods to classic time travel stories will delight some readers; those merely looking for a page-turning adventure will find that and more." —Kirkus Reviews, starred review

"In the end, Al cleverly engineers a total win, and if that seems unlikely considering the hazards of meddling with the past, readers won’t begrudge him." —Booklist, starred review

ROSS WELFORD worked as a business journalist before becoming a freelance writer and television producer. He is the author of TIME TRAVELING WITH A HAMSTER, called "smart, engaging, and heartwarming" in a starred review by Booklist and named both a New York Public Library and Bank Street College of Education Best Children's Book of the year, as well as WHAT NOT TO DO IF YOU TURN INVISIBLE and THE 1000-YEAR-OLD BOY. Follow him on Twitter at @rosswelford.
Loading...
or support indie stores by buying on