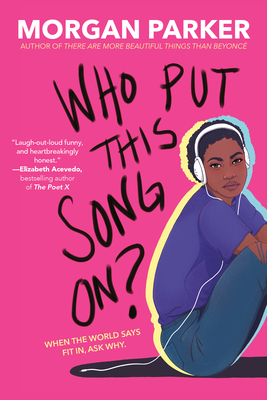 Who Put This Song On?

In the vein of powerful reads like The Hate U Give and The Poet X, comes poet Morgan Parker's pitch-perfect novel about a black teenage girl searching for her identity when the world around her views her depression as a lack of faith and blackness as something to be politely ignored.

Trapped in sunny, stifling, small-town suburbia, seventeen-year-old Morgan knows why she's in therapy. She can't count the number of times she's been the only non-white person at the sleepover, been teased for her "weird" outfits, and been told she's not "really" black. Also, she's spent most of her summer crying in bed. So there's that, too.

Lately, it feels like the whole world is listening to the same terrible track on repeat--and it's telling them how to feel, who to vote for, what to believe. Morgan wonders, when can she turn this song off and begin living for herself?

Loosely based on her own teenage life and diaries, this incredible debut by award-winning poet Morgan Parker will make readers stand up and cheer for a girl brave enough to live life on her own terms--and for themselves.

"Morgan Parker put THIS song on--and I hope it never turns off." —Nic Stone, New York Times bestselling author of Dear Martin and Odd One Out

“A triumphant first impression in the YA space.” —Entertainment Weekly

“An incredibly heartfelt, deep story about a girl's coming of age.” —Refinery29

Praise For Who Put This Song On?…

Praise for Who Put This Song On?:

“Funny and frank, Morgan Parker's Who Put This Song On? is a must-read in contemporary YA." —Bustle

★"A funny, clever, wild ride of a story about growing up and breaking free." —Kirkus Reviews, Starred Review

★"This fresh read provides a positive and inclusive take on mental health and wellness and offers readers some tools to survive on their own.” —Booklist, Starred Review

★“Drawing on her own teen experiences, Parker (There Are More Beautiful Things Than Beyoncé for adults) adroitly touches upon matters of respectability and ‘presentableness,’ stigmas against discussing mental health issues in the black community and among young adults, and internalized and societal racism.” —Publishers Weekly, Starred Review

“It’s rare to find a book that aptly balances the comedy and tragedy of being human. Morgan Parker put THIS song on—and I hope it never turns off.” —Nic Stone, New York Times bestselling author of Dear Martin and Odd One Out

“As a weird, depressed, Radiohead-obsessed black post-teen myself, it’s clear Morgan ripped my heart out and splattered it across the pages of this book. It’s perfect.” —Samantha Irby, New York Times bestselling author of We Are Never Meeting in Real Life.

"Nothing short of triumphant.” —NYLON

Morgan Parker is the author of Magical Negro (Tin House Books 2019), There Are More Beautiful Things Than Beyoncé (Tin House Books 2017), and Other People's Comfort Keeps Me Up at Night (Switchback Books 2015). Her debut book of nonfiction will be released in 2020 by One World. Parker received her bachelor's degree in anthropology and creative writing from Columbia University and her master's in poetry from NYU. Her poetry and essays have been published and anthologized in numerous publications, including the Paris Review; The BreakBeat Poets: New American Poetry in the Age of Hip-Hop; Best American Poetry 2016; the New York Times; and the Nation. Parker is the recipient of a 2017 National Endowment for the Arts Literature Fellowship, winner of a 2016 Pushcart Prize, and a Cave Canem graduate fellow. Find her online at morgan-parker.com and on Twitter at @morganapple.
Loading...
or
Not Currently Available for Direct Purchase