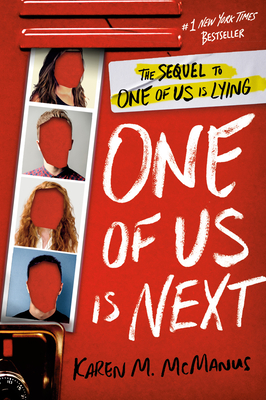 One of Us Is Next

The Sequel to One of Us Is Lying

#1 NEW YORK TIMES BESTSELLER • The highly anticipated sequel to One of Us Is Lying! There's a new mystery to solve at Bayview High, and there's a whole new set of rules.

Come on, Bayview, you know you've missed this.

A ton of copycat gossip apps have popped up since Simon died, but in the year since the Bayview four were cleared of his shocking death, no one's been able to fill the gossip void quite like he could. The problem is no one has the facts.

This time it's not an app, though—it's a game.

Phoebe's the first target. If you choose not to play, it's a truth. And hers is dark.

Then comes Maeve and she should know better—always choose the dare.

But by the time Knox is about to be tagged, things have gotten dangerous. The dares have become deadly, and if Maeve learned anything from Bronwyn last year, it's that they can't count on the police for help. Or protection.

Simon's gone, but someone's determined to keep his legacy at Bayview High alive. And the rules have changed.

“A thriller from one of the best writers in the YA mystery genre, One of Us Is Next delivers more shocking surprises and twists you won’t see coming.” --PASTE

Praise for One of Us Is Next:

★"Full of exciting and unexpected twists and racing toward a shocking conclusion, McManus’s tale will not disappoint fans, and those unfamiliar with her previous work will inhale this complicated story of friendship and revenge." —Publishers Weekly, Starred Review

"A thrilling read...[that] has all the twists and turns that readers love." —Booklist

“Pretty Little Liars meets The Breakfast Club....so make room for One of Us Is Lying in your bags, because this is one carry-on you won’t want to put down." —EW

“You’ll tear through this juicy, super-fun (if murder can ever be fun?) thriller." —Bustle

"A whodunit with a Breakfast Club twist...following four unique voices on a chase to find the killer, this one will keep you guessing until the very, very end." —Popcrush

"This is no ordinary whodunit…surprising and relevant." —USA Today

"Readers will have a hard time putting this clever page-turner down." —BookPage

“An addictive, devour-in-one-sitting thriller with so many twists and turns you'll be wondering until the very end: Who really killed Simon?” —Kara Thomas, author of The Darkest Corners and Little Monsters

"This fast-paced blend of Gossip Girl, Pretty Little Liars, and classic John Hughes will leave readers racing to the finish as the try to unravel the mystery on their own." —Kirkus Reviews

"One of Us Is Lying is flat-out addictive...[McManus] weaves an authentic, suspenseful mystery that readers can imagine taking place at their very own high school.” —RT Book Reviews

"A smart, twisted, and unpredictable YA mystery that will have readers guessing until the very end." —SLJ

"An engaging, enticing look at the pressures of high school and the things that cause a person to lose control."—Booklist

Karen M. McManus earned her BA in English from the College of the Holy Cross and her MA in journalism from Northeastern University. She is the #1 New York Times bestselling author of One of Us Is Lying, its sequel One of Us Is Next, and Two Can Keep a Secret. Her work has been published in more than 40 languages. To learn more about Karen and her books, visit karenmcmanus.com, or follow @writerkmc on Twitter and Instagram.
Loading...
or
Not Currently Available for Direct Purchase