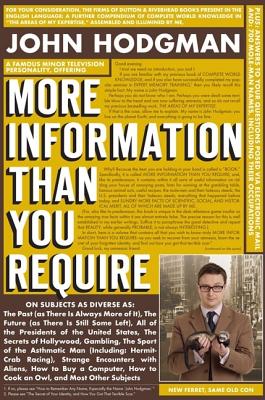 More Information Than You Require

The bestselling author of The Areas of My Expertise-- also known as The Daily Show's "Resident Expert" and the PC in the iconic Mac ads--picks up exactly where his first book left off. Exactly.

Like its predecessor, MORE INFORMATION THAN YOU REQUIRE compiles incredibly handy made up facts into brief articles, overlong lists, frighteningly complex charts, and beguiling narratives on new and familiar themes such as:
THE PAST (because there is always more)
THE FUTURE (because they say there is still some left to discuss)
THE METHOD BY WHICH WE "ELECT" OUR PRESIDENTS (as this will be happening soon)
THE STRANGE OKAPI (an actual animal) GAMBLING: THE SPORT OF THE ASTHMATIC MAN (includes hermit crab racing)
HOW TO BE A FAMOUS MINOR TELEVISION PERSONALITY (hint: go on television)
PLUS: 700 MOLE-MAN NAMES (and their occupations)

Yes. HODGMAN MAY HAVE BEEN BRIEFLY ABSENT FROM YOUR LIFE, but with this volume he is ready to pick up exactly where THE AREAS OF MY EXPERTISE left off--specifically AT PAGE 237.

John Hodgman lives in New York City, where he curates and hosts "The Little Gray Book Lectures," a monthly colloquium of readings, songs, and dubious scholarship. He is a contributing writer at "The New York Times Magazine" and a frequent voice on public radio's "This American Life." Further fiction, nonfiction, and genres in between have appeared in "The Paris Review," "McSweeney's," "One-Story," and "The Believer." He has performed at the U.S. Comedy Arts Festival in Aspen, as well as on the great stages of Chicago, Philadelphia, and London's Barbican.
Loading...
or
Not Currently Available for Direct Purchase