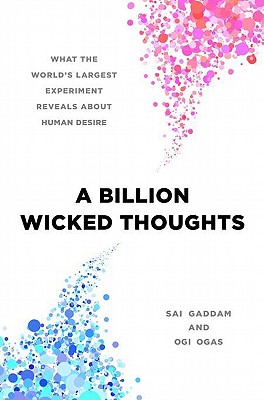 What the World's Largest Experiment Reveals about Human Desire


Praise For A Billion Wicked Thoughts: What the World's Largest Experiment Reveals about Human Desire…

"In a stroke of ingenuity, Ogas and Gaddam circumvent the deepest limitation of standard psychological surveys: that they merely tap undergraduates' socially acceptable responses, a flaw nowhere more damaging than in the touchy realm of sexuality. A Billion Wicked Thoughts is a goldmine of information about this hugely important topic, and, not surprisingly, gripping and sometimes disturbing reading."
-Steven Pinker, Harvard College Professor of Psychology, Harvard University, and author of How the Mind Works and The Blank Slate

"This is an amazing book. For the first time ever, Ogas and Gaddam skillfully tie together the latest findings from neuroscience, evolutionary biology, social psychology, and millions of internet users. Everything you always wanted to know about your desires in the bedroom."
-Daniel J. Levitin, bestselling author of This Is Your Brain on Music and The World in Six Songs

"Every invention in communication technology--the printing press, photography, motion pictures, videotape, the Internet--was quickly co- opted to produce and disseminate erotica. Just as the microscope and the telescope illuminated for the first time the very small and the very large, A Billion Wicked Thoughts uses the power of the Internet to illuminate with unprecedented wattage human male and female desires. Ogas and Gaddam analyzed a mountain of Internet data to produce a breakthrough in the study of human sexuality."
-Donald Symons, Professor Emeritus, University of California Santa Barbara, author of The Evolution of Human Sexuality

"A Billion Wicked Thoughts provides a brilliant, thoroughly researched, and totally engaging analysis of human sexuality using vast and original analyses of the Internet. It furnishes an x-ray of male and female sexual minds and explains why they differ so profoundly. The insights it yields are often surprising, sometimes shocking, and never boring. I couldn't put the book down."
-David M. Buss, author of Evolutionary Psychology: The New Science of the Mind and The Evolution of Desire: Strategies of Human Mating

"On the Internet, the evolutionary past meets futuristic technology, enabling the blossoming of all manner of sexual tastes, fantasies, and desires. Ogas and Gaddam have mined these new sources of information- arguably the world's largest experiment on human behavior--to produce a fascinating and terrific book on human sexuality, in all its timeless mysteries and ultra-modern manifestations. This well-written, entertaining book is packed with information, ideas, and insights. There is no better way to understanding your desires, your partner's, or anyone else's."
-Roy Baumeister, Professor of Psychology, Florida State University

"A brilliant romp through the darkest recesses of our sexual minds, based on the unwitting confessions of millions of anonymous Internet users."
-Simon LeVay, author of The Sexual Brain and Gay, Straight and the Reason Why

"Ogas & Gaddam mine the power of Internet for expressions of male and female mating psychology that are unfiltered by social expectations. In the process, they unearth A Billion Wicked Thoughts, many of which depart radically from our standard script for human mating psychology. These counter-intuitive insights into the sexual psyche of our species should provide much fodder for discussion among sex researchers."
-Paul Vasey, Professor of Behavioral Science, University of Lethbridge

Ogi Ogas studies computational models of memory, learning, and vision. He was a Department of Homeland Security Fellow.

Sai Gaddam studies large-scale data analysis and serves as a data mining consultant in India. They both received their Ph.D.s in computational neuroscience from Boston University.
Loading...
or
Not Currently Available for Direct Purchase