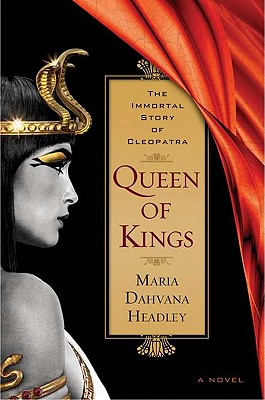 The immortal story of Cleopatra.
Passion and seduction, witches and warriors, and history and mythology combine to bring the timeless story of Cleopatra to life like never before in this stunningly original and spellbinding debut.
The year is 30 BC. A messenger delivers word to Queen Cleopatra that her beloved husband, Antony, has died at his own hand. Desperate to save her kingdom and resurrect her husband, Cleopatra summons the most fearsome warrior goddess, Sekhmet, and against the warnings of her scholars she strikes a mortal bargain. But not even the wisest scholars could have predicted what would follow...
In exchange for Antony's soul, Cleopatra is transformed into a vampiric creature of mythical proportions, an immortal shapeshifter with superhuman strength and an insatiable hunger for human blood-a being at once ferocious and seductive. And she is bent on vengeance against those who have wronged her family and her kingdom. Clashing against witches and monsters, gods and warriors, Cleopatra journeys from the tombs of Egypt to the great amphitheaters of Rome to the ancient underworld-where she will meet her love once again, and where the battle between man and beast will determine the fate of the world.
Blending history, fantasy, romance, and the supernatural, Queen of Kings is a masterful feat of the imagination that fans of Diana Gabaldon, Patricia Briggs, Philippa Gregory, and Neil Gaiman won't want to miss.

Read Maria Dahvana Headley's blogs and other content on the Penguin Community.
Watch a Video

Praise For Queen of Kings…

"Queen of Kings is the definition of a page-turner: An epic historical thriller that combines a great love story with a slew of witches, gods, ghosts, and classical monsters. Add the Roman Army and Cleopatra and it is obvious: This is the book readers have been waiting for."
-Danielle Trussoni, New York Times bestselling author of Angelology