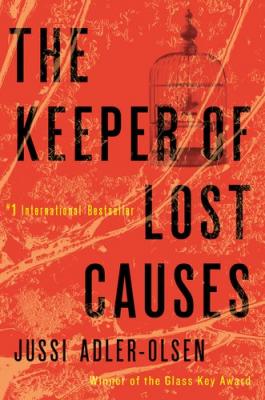 The Keeper of Lost Causes

“Chief Detective Carl Morck doesn't play by the book, but he has been successful at solving Denmark's most difficult homicide cases. When a bullet almost takes his life and two of his partners are not so lucky, he changes his outlook. Being assigned to work on cold cases satisfies his need to do nothing, but his request for an assistant interferes with his apathy. Adler-Olsen has created a hero with a keen sense of both humor and honor, an assistant who is clever and determined, and a case that keeps the clues coming but won't be solved until the last page.”
— Karen Briggs, Great Northern Books and Hobbies, Oscoda, MI
View the List

Jussi Adler-Olsen, author of "The Absent One," is Denmark's premier crime writer. His books routinely top the bestseller lists in northern Europe, and he's won just about every Nordic crime-writing award, including the prestigious Glass Key Award-also won by Henning Mankell, Stieg Larsson, and Jo Nesbo. Now, Dutton is thrilled to introduce him to America.

"The Keeper of Lost Causes," the first installment of Adler- Olsen's Department Q series, features the deeply flawed chief detective Carl MOrck, who used to be a good homicide detective-one of Copenhagen's best. Then a bullet almost took his life. Two of his colleagues weren't so lucky, and Carl, who didn't draw his weapon, blames himself.

So a promotion is the last thing Carl expects.

But it all becomes clear when he sees his new office in the basement. Carl's been selected to run Department Q, a new special investigations division that turns out to be a department of one. With a stack of Copenhagen's coldest cases to keep him company, Carl's been put out to pasture. So he's as surprised as anyone when a case actually captures his interest. A missing politician vanished without a trace five years earlier. The world assumes she's dead. His colleagues snicker about the time he's wasting. But Carl may have the last laugh, and redeem himself in the process.


Praise For The Keeper of Lost Causes…

"Far from being just another morose Nordic crime writer, Adler-Olsen creates a detective whose curiosity is as active as his soul is tortured. The villain is a monster and the crime horrendous, but readers will root for the victim and for the belabored Department Q. This absorbing psychological thriller is recommended not only for fans of Henning Mankell, Jo Nesbø, and Stieg Larsson but for true crime aficionados who might like to try fiction."
--Library Journal, (starred review)

"The Keeper of Lost Causes is dark, atmospheric, and compelling. Those who loved The Girl with the Dragon Tattoo will devour this book."
--C.J. Box, New York Times bestselling author of Cold Wind

"Jussi Adler-Olsen tells his stories as wickedly as Dean Koontz and has his detectives work as hard as Stieg Larsson."
--Jydske Vestkysten (Denmark)

"This novel is for every Scandinavian crime fiction fan a must-read!"
--Hannoversche Allgemeine (Germany)

"As impressive as it is unnerving."
--The Independent

"An unusually fine and extremely fascinating thriller, which will keep you breathless till the very last page."
--politiken.dk

Jussi Adler-Olsen is Denmark's #1 crime writer. This novel has already appeared at the top of bestseller lists in Denmark and Germany, and subsequent entries in the series debuted at #1.