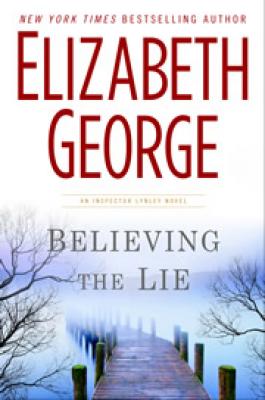 “Once again George has provided us with a great mystery involving favorite characters from past works, Inspector Lynley and Sgt. Havers. The subplots are as engrossing as we've come to expect, and this story offers some new elements as well in both the humorous descriptions of Havers' 'makeover' and the choice of a remarkably beautiful and haunting setting in the Lake District of Cumbria. Yet another exciting page-turner from an accomplished master of the genre.”
— Jeanne Regentin, Between the Covers, Harbor Springs, MI
View the List

After writing sixteen Inspector Lynley novels, "New York Times" bestselling author Elizabeth George has millions of fans waiting for the next one. As "USA Today" put it, "It's tough to resist George's storytelling, once hooked." With "Believing the Lie," she's poised to hook countless more.

Deborah's investigation of the prime suspect-Bernard's prodigal son Nicholas, a recovering drug addict-leads her to Nicholas's wife, a woman with whom she feels a kinship, a woman as fiercely protective as she is beautiful. Lynley and Simon delve for information from the rest of the family, including the victim's bitter ex-wife and the man he left her for, and Bernard himself. As the investigation escalates, the Fairclough family's veneer cracks, with deception and self-delusion threatening to destroy everyone from the Fairclough patriarch to Tim, the troubled son Ian left behind.

Elizabeth George is the "New York Times" bestselling author of sixteen suspense novels, one book of nonfiction, and two short-story collections. Her work has been honored with the Anthony and Agatha awards, as well as several other prestigious prizes. She lives in Washington State.
Loading...
or support indie stores by buying on
(This book is on backorder)