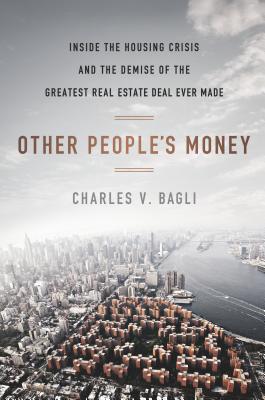 In just over three years, real estate giant Tishman Speyer and its partner, BlackRock, lost billions of investors dollars on a single deal. The "New York Times" reporter who first broke the story of the sale of Stuyvesant Town-Peter Cooper Village takes readers inside the most spectacular failure in real estate history, using this single deal as a lens to see how and why the real estate crisis happened.
How did the smartest people in real estate lose billions in one single deal? How did the Church of England, the California public employees pension fund, and the Singapore government lose more than one billion dollars combined investing in a middle-class housing complex in New York City? How did MetLife make three billion dollars on the deal without any repercussions from a historically racist policy of housing segregation? And how did nine residents of a sleepy enclave in New York City win one of the most unlikely lawsuits in the history of real estate law?
Not only does "Other People's Money" answer those questions, it also explains the current recession in stark, clear detail while providing riveting first-person accounts of the titanic failure of the real estate industry to see that a recession was coming. It's the definitive book on real estate during the bubble years and what happened when that enormous bubble exploded.


Praise For Other People's Money: Inside the Housing Crisis and the Demise of the Greatest Real Estate Deal Ever Made…

"It's been said that journalism is the first draft of history, but with his upcoming book Other People's Money, New York Times reporter Charles Bagli writes the most authoritative account yet of the failed Stuyvesant Town-Peter Cooper Village deal and the housing crises that rocked the world." - New York Observer

“The reader interested in New York real estate history, its moneyed elites, or even the self-contradictory aspects of social investment should find ample material for reflection and enjoyment in Bagli’s account.”
— Publishers Weekly

“Other People’s Money delivers one of the great untold stories of the financial crisis—how greed, arrogance, and the distorted incentives of the commercial real estate market helped drive our nation’s economy off a cliff. Told through meticulous reporting of what was arguably the worst real estate deal of all time, in this vitally important book Bagli demonstrates how the well-heeled and well-connected walked away relatively unscathed from the wreckage that they created, leaving a devastated middle class holding the bag yet again.”
—Neil Barofsky, New York Times bestselling author of Bailout: How Washington Abandoned Main Street While Rescuing Wall Street

“Other People’s Money is a terrific book. With remarkable textual clarity and a fine-tuned dramatic sensibility, Charles Bagli has recreated the extraordinarily high stakes poker game that was the largest real estate deal in U.S. history. His characters include the biggest real estate players on the planet as well as middle-class residents desperately holding on by their fingertips to the only housing they can afford. A truly epic tale, one that systematically demonstrates the logic (and illogic) of the real estate bubble that set the stage for worldwide recession and that reveals the wild, unforgiving nature of twenty-first-century capitalism. It’s a powerful story and a great read.”
—Rick Fantasia, coauthor of Hard Work: Remaking the American Labor Movement and professor of sociology at Smith College

CHARLES V. BAGLI is a "New York Times" reporter who covers the intersection of politics and real estate. He has written about the sale of high-profile buildings, political contributions of the real estate industry, the battle to build atwo-billion-dollar stadium for the Jets, bid rigging in the construction industry, payoffs at the tax assessor's office, and a Sutton Place co-op that turned public land into a private park. He has worked for the "New York Observer," the "Daily Record" of Morristown, New Jersey, the "Tampa Tribune" and the "Brooklyn Phoenix." He lives with his wife in New Jersey. They have two daughters."
Loading...
or
Not Currently Available for Direct Purchase