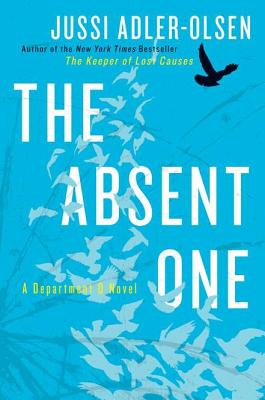 The Absent One (Hardcover)

"New York Times" bestseller Jussi Adler-Olsen returns with the second book in his electrifying Department Q series.
In "The Keeper of Lost Causes, "Jussi Adler-Olsen introduced Detective Carl Morck, a deeply flawed, brilliant detective newly assigned to run Department Q, the home of Copenhagen's coldest cases. The result wasn t what Morck or readers expected, but by the opening of Adler-Olsen's shocking, fast-paced follow-up, Morck is satisfied with the notion of picking up long-cold leads. So he's naturally intrigued when a closed case lands on his desk: A brother and sister were brutally murdered two decades earlier, and one of the suspects part of a group of privileged boarding-school students confessed and was convicted.
But once Morck reopens the files, it becomes clear that all is not what it seems. Looking into the supposedly solved case leads him to Kimmie, a woman living on the streets, stealing to survive. Kimmie has mastered evading the police, but now they aren t the only ones looking for her. Because Kimmie has secrets that certain influential individuals would kill to keep buried . . . as well as one of her own that could turn everything on its head.
Every bit as pulse-pounding as the book that launched the series, "The Absent One" delivers further proof that Jussi Adler-Olsen is one of the world's premier thriller writers.

Praise For The Absent One…


"Adler-Olsen's humor and his portrayal of Kimmie's sad life make The Absent One stand out among today's flood of Nordic mysteries."
—Kirkus Reviews

"The Copenhagen-set sequel to The Keeper of Lost Causes is quirky and wry."
—The Sacramento Bee

“The pages fly by as the twisty puzzle unfolds. Stieg Larsson fans will be delighted.”
— Publishers Weekly (starred review) on The Keeper of Lost Causes


“Comparisons [to Stieg Larsson] are inevitable and, while he may lack a Salander, Adler-Olsen’s prose is superior to Larsson’s, his tortures are less discomfiting, and he has a sense of humor.”
— Booklist (starred review) on The Keeper of Lost Causes


“Plan on putting everything else in your life on hold if you pick up this book.”
— The Oregonian on The Keeper of Lost Causes

“A relentless thrill ride of surprise, shock and terror.”
— The Sacramento Bee on The Keeper of Lost Causes


“The new ‘it’ boy of Nordic Noir.”
— The Times, London on The Keeper of Lost Causes

"The Keeper of Lost Causes is dark, atmospheric, and compelling. Those who loved The Girl With the Dragon Tattoo will devour this book."
— C.J. Box