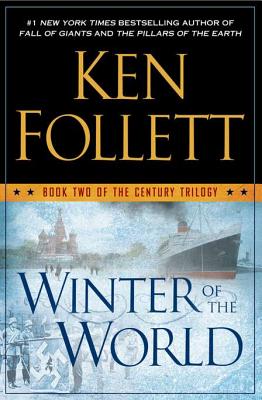 Winter of the World

Picking up where Fall of Giants, the first novel in the extraordinary Century Trilogy, left off, Winter of the World follows its five interrelated families American, German, Russian, English, and Welsh through a time of enormous social, political, and economic turmoil, beginning with the rise of the Third Reich, through the great dramas of World War II, and into the beginning of the long Cold War.
Carla von Ulrich, born of German and English parents, finds her life engulfed by the Nazi tide until daring to commit a deed of great courage and heartbreak . . . . American brothers Woody and Chuck Dewar, each with a secret, take separate paths to momentous events, one in Washington, the other in the bloody jungles of the Pacific . . . . English student Lloyd Williams discovers in the crucible of the Spanish Civil War that he must fight Communism just as hard as Fascism . . . . Daisy Peshkov, a driven social climber, cares only for popularity and the fast set until war transforms her life, while her cousin Volodya carves out a position in Soviet intelligence that will affect not only this war but also the war to come.

Praise For Winter of the World…

“Just as potent, engrossing, and prolix as the opening opus, Fall of Giants. [Follett’s] dedication and ability to keep so many plots spinning while delivering a story that educates, entertains…Will leave fans eagerly awaiting the trilogy’s crowning capstone."
—Publishers Weekly

“Follett’s storytelling is unobtrusive and workmanlike…he spins a reasonable and readable yarn that embraces dozens of characters and plenty of Big Picture history.”
—Kirkus Reviews

“Follett never lets the action lag as he adeptly ties together all the sweeping economic, cultural, political, and social transformations of the entire era.”
—Booklist

“It’s a book that will suck you in, consume you for days or weeks… then let you out the other side both entertained and educated."
— USA Today on Fall of Giants


"A tireless storyteller...grippingly told, and readable to the end."
—The New York Times Book Review on Fall of Giants

"Tantalizing"
—Newsday on Fall of Giants


"Lively and entertaining."
—The Washington Post on Fall of Giants


"Abandon your normal activities for a couple of days when you crack this one open, because you're likely to get hooked like a Copper River salmon."
--The Seattle Times on WINTER OF THE WORLD.