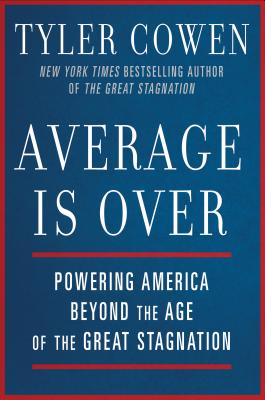 Powering America Beyond the Age of the Great Stagnation

Widely acclaimed as one of the world's most influential economists, Tyler Cowen returns with his groundbreaking follow-up to the "New York Times" bestseller "The Great Stagnation."
The widening gap between rich and poor means dealing with one big, uncomfortable truth: If you're not at the top, you're at the bottom.
The global labor market is changing radically thanks to growth at the high end--and the low. About three quarters of the jobs created in the United States since the great recession pay only a bit more than minimum wage. Still, the United States has more millionaires and billionaires than any country ever, and we continue to mint them.
In this eye-opening book, renowned economist and bestselling author Tyler Cowen explains that phenomenon: High earners are taking ever more advantage of machine intelligence in data analysis and achieving ever-better results. Meanwhile, low earners who haven't committed to learning, to making the most of new technologies, have poor prospects. Nearly every business sector relies less and less on manual labor, and this fact is forever changing the world of work and wages. A steady, secure life somewhere in the middle--average--is over.
With The Great Stagnation, Cowen explained why median wages stagnated over the last four decades; in "Average Is Over "he reveals the essential nature of the new economy, identifies the best path forward for workers and entrepreneurs, and provides readers with actionable advice to make the most of the new economic landscape. It is a challenging and sober must-read but ultimately exciting, good news. In debates about our nation's economic future, it will be impossible to ignore.

Praise For Average Is Over: Powering America Beyond the Age of the Great Stagnation…

Praise for Average is Over

"Cowen has a single core strength...his taste for observations that are genuinely enlightening, interesting, and underappreciated." - The Daily Beast

"A bracing new book" - The Economist

"Tyler Cowen's new book Average is Over makes an excellent followup to his previous work The Great Stagnation and I expect it will set the intellectual agenda in much the way its predecessor did." - Slate

"The author roves broadly and interestingly to make his case, outlining radical economic transformations that lie in store for us, predicting the rise and fall of cities depending on their capacity to adapt to this machine-driven world and offering policy prescriptions for preserving American prosperity." - The Wall Street Journal

"Audacious and fascinating." - The Financial Times

"Cowen has a rare ability to present fundamental economic questions without all of the complexity and jargon that make many economics books inaccessible to the lay reader." - The American Interest

Praise for The Great Stagnation

“One of the most talked-about books among economists right now.” —Renee Montagne, Morning Edition, NPR

“Tyler Cowen may very well turn out to be this decade’s Thomas Friedman.” —Kelly Evans, The Wall Street Journal

“Perhaps it’s the mark of a good book that after you’ve read it, you begin to see evidence for it’s thesis in lots of different areas… it’s well worth the time and the money.” —Ezra Klein, The Washington Post

“Cowen says over the last 300 years the U.S. has eaten all the low-hanging fruit. We’ve exhausted the easy pickings of abundant land, technological advance, and basic education for the masses. We thought the low-hanging fruit would never run out. It did, but we pushed ahead. And thus Cowen’s understated but penetrating summation of the financial crisis: “We thought we were richer than we were.” —Bret Swanson, Forbes

"The Great Stagnation has become the most debated nonfiction book so far this year." - David Brooks, The New York Times

"Cowen's book...will have a profound impact on the way people think about the last thirty years." - Ryan Avent, Economist.com


Praise for An Economist Gets Lunch

“Part Economic history… part guide to getting a better meal at home or a restaurant. Renowned economist…Professor Cowen is an expert on the economics of culture and the arts.” —Damon Darlin, The New York Times Dining Section

TYLER COWEN is a professor of economics at George Mason University. His blog, Marginal Revolution, is one of the world's most influential economics blogs. He also writes for the "New York Times, Financial Times" and "The Economist" and is the cofounder of Marginal Revolution University. The author of five previous books, Cowen lives in Fairfax, Virginia.
Loading...
or
Not Currently Available for Direct Purchase