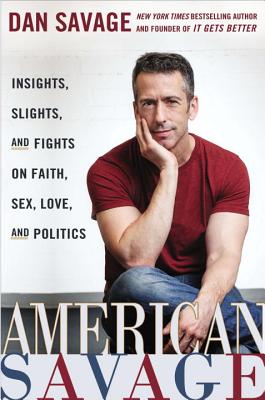 Insights, Slights, and Fights on Faith, Sex, Love, and Politics

On the heels of his Emmy-winning It Gets Better campaign, columnist and provocateur Dan Savage weighs in on such diverse issues as healthcare, gun control, and marriage equality with characteristic straight talk and humor.
Dan Savage has always had a loyal audience, thanks to his syndicated sex-advice column "Savage Love," but since the incredible global success of his It Gets Better project--his book of the same name was a "New York Times "bestseller--his profile has skyrocketed. In addition, he's written for "The New York Times," "Rolling Stone," "The Onion," "GQ," "The Guardian," Salon.com, and countless other widely read publications. Savage is recognized as someone whose opinions about our culture, politics, and society should not only be listened to but taken seriously.
Now, in "American Savage," he writes on topics ranging from marriage, parenting, and the gay agenda to the Catholic Church and sex education.

“Dan Savage is a gay superhero… marvelously discursive and footnote-laden collection of new essays… American Savage will most likely preach to the choir, but its polemics are still beautiful, verbal slap-downs of sanctimonious bigotry.” - Time Out New York

"Savage's essays on fatherhood, cheating, and the subset of Americans, in American Savage, who still think sexuality is a choice are powerful messages for both the head and the heart." - Entertainment Weekly

"Dan Savage is the most prominent activist for gay rights in America...many of his proponents forget just how good of a writer he is." - The Onion

"This book by one of the country's favorite authors tackles faith, sex, love, and politics and looks towards an America where people don't judge people based on their bedroom habits. To liberals, this book is an eloquent doctrine of all that they believe, the love, honesty, and compassion form the backbone of all relationships. Conservatives, don't place this book on the burn list just yet: Savage's take on religion is wonderfully bipartisan in his emphasis on spirituality and reconciliation above all else." - In the Capital, "7 Books Every Politico Should Read for Summer 2013"

Praise for IT GETS BETTER

“An off-shoot of Savage’s online movement to reach out to bullied gay teens, this collection gathers inspiring essays from the likes of Ellen DeGeneres, Tim Gunn, and Barack Obama.”
—Entertainment Weekly’s ‘Must List’

“If a copy of It Gets Better could find a home in every school library in America, think how many teachers, administrators, and parents would have the tools they need to improve their school’s climate.”
—The Huffington Post

“Brand-new and expanded essays, a section devoted to resources for LGBT teens, and an introduction from Savage that looks back at the project’s meteoric rise to viral fame. It’s chicken soup for the gay teenage soul.”
—Salon

DAN SAVAGE is the author of the internationally syndicated sex-advice column, "Savage Love." His books include the "New York Times "bestseller "It Gets Better, Skipping Towards Gomorrah, "and "The Kid," his award-winning memoir about adoption. He lives in Seattle, Washington.
Loading...
or
Not Currently Available for Direct Purchase